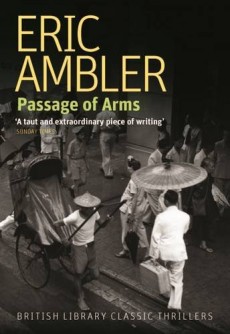 A clerk working on a rubber plantation finds a cache of weapons. Selling them would make him rich, but if he were caught the penalty would be death.

Passage of Arms, a thriller about arms dealing in the Far East, was originally published in 1959 and was winner of the Crime Writers’ Association Gold Dagger for best crime novel of that year.

This new edition is published by the British Library as part of their classic crime fiction series which also includes Ambler’s A Kind of Anger and The Light of Day. It has a new introduction by leading authority on crime fiction Martin Edwards who describes it as ‘an unorthodox thriller written by one of the twentieth century’s more sophisticated storytellers.’ Ambler’s writing style is indeed tidy and elegant, telling his story in a more understated way than most modern crime thriller authors.

The story begins with an Indian clerk, Giriji Krishnan, who works for a British-owned rubber estate in Malaya, finding a cache of weapons and ammunition abandoned by a group of guerrillas. He decides that if he could sell them then he could use the money to start up his own local bus service and fulfil his childhood ambition.

However, selling arms is illegal and the penalty if he were caught would be death. Giriji, normally an unassuming man until the discovery, is the catalyst for others to become involved and play their role in the crime. Drawn into his scheme are opportunist businessmen, dubious officials and a pair of American tourists looking for adventure unaware of the dangerous melting pot world they are entering.

Passage of Arms has no all-action hero or sub-plots. Its episodic structure, well-drawn characters and colourful locations combine to offer an atmospheric and elegant thriller. It also evokes a period feel of a world when exotic travel is uncommon and where business transactions are conducted on bits of paper and the telephone. Even the cover of the book, a black and white photograph of a South East Asia street scene, draws you into a mysterious place and time forever changed. However, quality writing like this, no matter when it was written, stands the test of time.