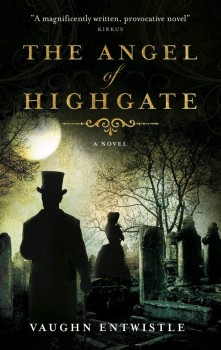 The Angel of Highgate

Victorian rakehell Lord Geoffrey Thraxton cares only for his own amusement and boasts his contempt for mortality. But in humiliating a literary critic, he creates an enemy who will change the rest of his life.

This prequel to Vaughn Entwistle’s acclaimed The Revenant of Thraxton Hall, the first of The Paranormal Casebooks of Sir Arthur Conan Doyle series, is a full-blooded Victorian melodrama which also works quite brilliantly as a standalone story.

But be warned! Victorian readers were a good deal broader minded than today’s! If you have qualms about graphic and excessive violence, torture, animal cruelty or are offended by attacks on religion, this clearly isn’t for you!

Entwistle’s evocation of Victorian London is hardly sanitised. It reeks of every smell from horse dung and open middens, to almost every vice known to those who have the means to indulge them. It opens in October 1859, as rakehell Lord Geoffrey Thraxton, who cares for nothing but his own amusement, indulges in a spot of carefully staged necrophilia!

Thraxton, who boasts of his contempt for mortality, goes on to humiliate a literary critic in a duel, but in doing so makes a dangerous and sociopathic enemy who will change his whole life. From there, this enjoyable and intriguingly macabre mystery takes the reader on a tour of London’s seamy side – brothels, drugs dens, medical experimentation, grave robbing, plain old fashioned street robbery and a level of gang violence which makes the Krays and Richardsons look like amateurs, as it builds to an inevitably violent, if slightly over-dramatic climax.

It’s brilliantly written, in the style of the age. Alternately lush and morbidly black, its rich prose reflects the classic Victorian love of florid over-statement. The baddies are seriously bad. But they are balanced by the common sense and humanity of the ‘ordinary’ people, from all strata of society, who are so quintessentially ‘English’ as to be stereotypical.

Even Thraxton, a real anti-hero, must, in the end conform to type. Redemption, a key to all good Victorian stories, comes in the shape of a mysterious and tragic girl who haunts Highgate Cemetery. Their love story and its ending, is touchingly portrayed.

Entwistle writes passionately about his characters and their lives. He has created a strong story that both entertains, thrills and also contains some provocative elements. The actors are, without exception, well drawn – even the dark and twisted Dr Silas Garrett – and the dialogue is often colourful and entertaining, bordering on the genuinely funny in places and totally black in others.

These humorous elements complement the darker parts of the story, shifting the focus to provide a brief interlude from what could otherwise have been a recital of deprivation, vice and madness. It’s raw meat! But if you’ve the internal fortitude to cope, this is a clever, occasionally quite brilliant and moving exposition.