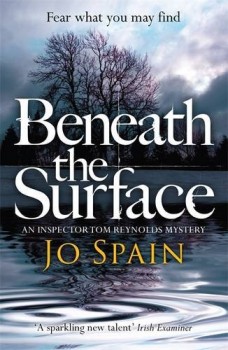 A minister’s aide is murdered in the Irish parliament building. Detective Inspector Tom Reynolds and his team must uncover the truth in a sea of lies, corruption and secrets.

Jo Spain writes as good a procedural as you are ever likely to read. Following up her debut With Our Blessing, DI Tom Reynolds and his team from the murder squad of Ireland’s criminal investigation bureau are back with a complicated and intriguing case which exposes the rotten underbelly of politics.

What makes this fledgling series outstanding is the author’s ability to make her coppers come alive. These are real policemen and women, with real families and real personal problems – characters to identify with amid a maze of dead ends, false leads, lies and deceptions. She takes every opportunity to set out the backgrounds and relationships of her wide range of characters both inside and outside the squad. The result is the story of a tightly-knit team in a cleverly conceived and executed standalone procedural/murder mystery/political and moral commentary.

The personal assistant to a Minister is cold-bloodedly shot dead during a reception in the seat of the Irish Parliament. The Minister concerned is seen as the golden boy of Irish politics and a future Taoiseach – prime minister. But he is involved in controversial legislation affecting offshore energy supplies and relationships with multi-national companies.

When Reynolds and his team discover the victim was attempting to retrieve compromising pictures of his Minister, they begin to question the politicians’ relationships with big business, and to manipulation or bribery. They must also consider if the aide wanted the pictures for another purpose. At first, all the evidence hints at a politically motivated crime, until a surprise discovery takes the investigation in a dramatically different direction and the motive for murder becomes a lot more personal.

This is a wickedly plotted and fast-paced story, although there is little traditional action until an explosive finale. Well researched and sensitive, it picks at some of the more prominent scabs of recent history and the grim realities of life for so many people in Irish society today. In the manner almost of a morality play, it deals with the scourge of corruption in public life and poses an entirely believable scenario of dark deeds below the apparently respectable surface of politics.

Spain also reflects the public – particularly rural – feeling of a country still struggling to come to terms with the 2008-9 crash: cuts in public services, rural transport slashed, traditional industries like fishing allowed to go to the wall, a government perceived as aloof and totally removed from its electorate. She blends all these strands quite brilliantly. Read it as a procedural with an up-to-the minute political background, a none too simple murder mystery or an expose of what the abuse of power can lead to.