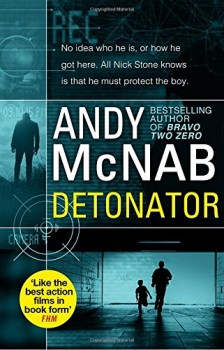 Nick Stone is on the run with a seven-year-old boy in tow, hampered by the fact that he has no memory of who is out to kill him, or why.

Former Special Forces hard man Nick Stone regains consciousness in the wreckage of a car on a mountain road with a memory of gunshots still ringing through his jumbled and incomplete memories. He crawls out of the wreckage of a car he doesn’t remember driving and is able to rescue a seven-year-old boy from the tangled metal of another car containing the body of someone he thinks was the boy’s father. The man appears to have been shot by his own bodyguard under the frightened eyes of his young son.

Nick Stone knows that somewhere in his fractured memory lies the knowledge he needs to make sense of the puzzle, but in the meantime, he has to turn to a combination of flight and fight to keep himself and the boy, Stefan, alive.

Stefan, struggling against the horror of seeing his father killed by a man he’d thought of both as a protector and a friend, comes over as an old soul in a young body. He deals calmly with wiping the CCTV coverage at his home and copes stoically with going on the run from clearly ruthless but wholly unknown enemies. I don’t know much about boys of this age, but I quickly fell for Stefan’s own brand of distinctly non-cutsie charm. Stone has to use all his resources to keep himself and the boy one step ahead while he struggles to make sense of the jigsaw pieces that emerge piecemeal from his mind.

Detonator has all of Andy McNab’s searing authenticity, but this time there is a brutal edge to the narrative that left me clutching at straws, desperately hoping for some sort of superhero to swoop in and put things right at the last minute. The book packs a series of punches that come one after the other, leaving little chance for the reader to catch their breath. For Stone, there seem to be few happy endings in life and I am beginning to wonder how long he can keep riding the punches before he breaks.

The book is flint-hard and as bleak as a granite moorland, but the relentless pace drags the story on to an ending that’s doomed to remain lodged in my mind for longer than I would like.