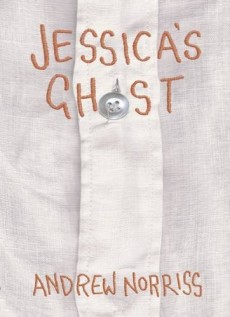 No one is more surprised than Jessica when someone is finally able to see her and talk to her. It’s lonely being a ghost, but now she has Francis for a friend.

Francis is a bit of a loner at school. He doesn’t have any particular friends and most of his classmates either ignore him or make fun of the fact that he enjoys sewing and making clothes. When he goes off by himself to sit on a bench at break time, he isn’t expecting anyone to join him. And Jessica isn't expecting him to be able to see her; after all, no one else can. She’s a ghost, and she’s got used to people not being able to see or hear her, even though it’s been a lonely life since she ‘woke up’ in the hospital where she died.

But Francis is different. He can see her and hear her and the two strike up an unlikely friendship that makes all the difference to both of them. And soon Francis isn't the only one to be able to talk to Jessica. Andi and Roland join their unlikely group, with Jessica as the catalyst that sparks off their friendships. Together, the four friends gradually learn more about Jessica and start to wonder why they have all been brought together in this way.

Jessica’s Ghost is the most delightful young teen book that I've read in years. You’d have to have a heart of pure granite not to get the warm fuzzies from it. The four children are all very different from each other, yet their friendship ends up seeming the most natural thing in the world, with Jessica as the glue that holds them together, at least at the beginning. Andi is short, broad and has a tendency to settle any differences with a well-aimed thump or kick. Roland is overweight and insecure, not wanting to go to school with the others. Apart, they are all easy prey for bullies, but together, they can face down anyone, especially with Jessica’s help; after all, a friend who can walk through walks and read answers over the teacher’s shoulder and pass them on is a pretty handy person to have around.

In Jessica’s Ghost, the friends find ways of helping each other, despite the pretty useless adults in their lives. Francis’ scatty mother is probably the best of the bunch. Andi’s mother seems almost complicit in the bullying her daughter gets by using nicknames such as Thuglette for her tough offspring. Roland’s mum feeds him gigantic meals, despite his weight, and seems to measure his love for her by how much he eats. Of Jessica’s background, we learn very little for most of the book, but the reveals, when they finally come, are well-constructed, and beautifully paced.

I was utterly engrossed in the developing friendship between the four youngsters, and enjoyed the gentle but powerful way the tension is ramped up. This is one of those books that I really didn't want to end. David Fickling Books are gaining a well-deserved reputation for the quality of their books for teens and young adults and this is one that I really can’t recommend too highly.

Jessica’s Ghost celebrates everyone’s right to be different without ever talking down to its audience or minimising the problems that being different can bring. It should also be required reading for anyone who plays any part in the devising and implementation of anti-bullying strategies. It’s more powerful than any policy documents on the subject I've ever read, as well as being fun, heart-warming and genuinely moving.