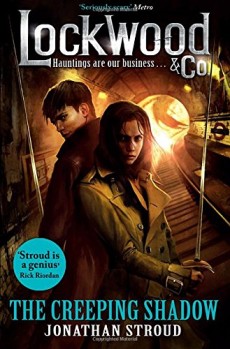 Lucy Carlyle has left Lockwood & Co to strike out on her own, but her resolve is tested when Lockwood comes to her with a proposition.

Lucy Carlyle has left Lockwood & Co to set up on her own as a freelance operative in the war against the dangerous ghosts that have been plaguing Britain for the last 50 years. She’s highly regarded by other agencies and her services are in demand.

Her former colleagues are bitter about what they see as her betrayal of them by leaving. What they don’t know is that Lucy’s motives were wholly altruistic. She was afraid that if she stayed, she would end up being responsible for the death of the dashing but enigmatic Anthony Lockwood. The fact that the prediction was made by a malevolent ghost is par for the course in Lucy’s life.

So when Lockwood approaches Lucy with a proposition – to help them locate and deal with the ghost of the notorious cannibal – she’s understandably not keen to get involved, but as usual, Lockwood turns on the charm, and tells her that Penelope Fittes, the leader of one of London’s best known agencies, has specifically requested her services.

There’s understandably a lot of tension between Lucy and the others. George Cubbins is barely speaking to her, and everyone seems to be blaming her departure on friction between her and recent addition to the agency, the elegant, super-efficient Holly Munro. Only Lucy knows the truth. Someone else is annoyed by the collaboration, as well – Lucy’s constant companion, the sarcastic, dangerous skull in the jar. The skull is acting like a jealous boyfriend, which only adds to Lucy’s problems.

Jonathan Stroud’s Lockwood & Co series hit the ground running and has gone from strength to strength. He paints a bleak picture of a country at war with the Visitors – the huge host of ghosts, spectres, apparitions and things that go bump in the night. In a world where only children have the necessary psychic abilities to see the ghosts, those same children, some as young as eight, are the ones that risk their life keeping adults safe. Agents can and do die, and there is a palpable feeling of menace hanging over the books.

The agents fight back with a diverse range of weapons ranging from rapiers to salt bombs, iron filing and lavender. Their methods are endlessly inventive, even when pitted against their greatest foe yet, the Creeping Shadow that has been terrorising the inhabitants of a remote village. The subtle steampunk vibe is as much in evidence as it has been in the earlier books, adding another layer of strangeness to a world that is almost – but not quite – the same as the one we inhabit.

The characters are sparky, the dialogue is witty, and I was able to revel in one of my favourite tropes, that of antagonists being forced to work together, when Quill Kipps, formerly the leader of one of the Fittes Agency’s teams, joins Lockwood’s motley crew, despite having left his psychic abilities along with his teens. All the books in the series have been excellent, but in The Creeping Shadow, Stroud manages to pile mystery on top of suspense, leaving me with the feeling that a year is far, far, too long to wait for the concluding part of a series that instantly shot to the very top of my reading pile. This is young adult writing of the very highest quality.