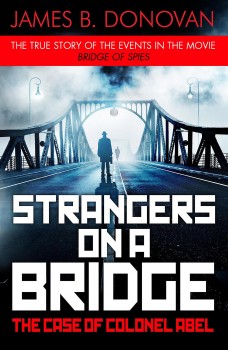 Strangers on a Bridge: The Case of Colonel Abel

by James B. Donovan

The true story of the arrest and trial of Soviet spy Colonel Rudolf Abel by the man who defended him – and his eventual exchange for shot down U2 pilot Gary Powers.

This is the remarkable story of a real-life espionage classic from the heart of the Cold War by the American lawyer who played such a major role in it – and eventually negotiated a dramatic early morning spy swop on Berlin’s Glienicke Bridge over the River Havel, the border at the time between East and West.

First published in 1964, just seven years after the start of the events which led to that exchange, it is also the story of two true gentlemen, who had they not been the products of their opposing ideologies, would surely have been close friends.

If you’ve seen the Steven Spielberg film Bridge of Spies starring Tom Hanks, forget it. This is how it really happened. The narrator is James Britt Donovan, the New York lawyer, ex-Navy officer, general counsel to America’s wartime Office of Strategic Services, the forerunner of the CIA, led by fellow lawyer, William ‘Wild Bill’ Donovan (no relation), and associate prosecutor at the Nuremberg trials of leading Nazis. He died in 1970 at the age of 53, leaving behind a legacy of government work, including arranging the freeing of almost ten thousand Cubans and Americans after the disastrous 1961 Bay of Pigs invasion.

Donovan, a patrician insurance lawyer, is one of the most memorable modern characters and an example of the finest America has produced. A Catholic family man of deep belief and character, he was brilliant, hard working, compassionate, devoted to his country and the law he served so ably. Everything he did was touched a spirit of justice and excellence which demanded he provided the best possible defence even to an enemy of his country.

In the dock and facing a possible death sentence was a man known, among other aliases, as Rudolf Ivanovitch Abel – he never admitted his real name – a colonel in the Russian NKVD intelligence service, forerunner of the KGB and SVR, possibly the most important ‘illegal’ undercover spy in America.

Abel, who had been in the US since 1948, had earned a Red Banner bravery award for his revival as central controller of the ‘Volunteer’ network, the ring of spies inside the Manhattan Project, America’s development of the atomic bomb.

An erudite and educated polymath, he spoke fluent English, German, Polish, Russian and Yiddish. He was also a brilliant radio operator involved in a major wartime deception operation against the Nazis, an engineer, photographer, musician and talented painter.

He was at least as devoted to his own country, despite Russia refusing to even acknowledge his existence. Throughout his trial and subsequent imprisonment he never once lost hope, his sense of purpose, his lively mind – he became a brilliant silk-screen printer and suggested improvements to the running of the prison where he was held – or his dry sense of humour.

The respect, even liking, between the two men is obvious from the story, based on Donovan’s own diaries and court records as he fought the case up to a split verdict by the US Supreme Court.

If the courtroom arguments lack a certain amount of bite, the eventual secret and protracted negotiations for the exchange of Abel for U2 spy pilot Gary Powers, shot down by the Russians over Sverdlovsk and two other American ‘spies’ are as exciting as any Le Carre novel.

There’s no point trying to go into detail. If you’re a student of modern history and want to know what the world of spies was really like in the late 1950s and early 1960s, with all its blunders, betrayals and bending of laws, you’ll find it difficult to put this book down. It is a gripping tale and a wonderful read. But above all it is the story of two remarkable men who deserve their place in history.