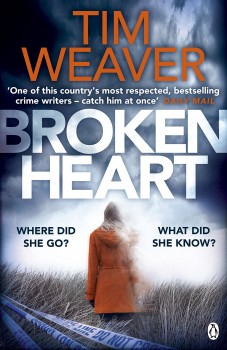 A woman drives to a secluded beauty spot and disappears. Her sister calls in missing persons’ investigator David Raker. For him the mystery of where she went is only the start.

David Raker, a missing persons’ investigator, gets a call form a woman in the US who reports that her sister has been missing for ten months. She was last seen at a beauty spot on the Somerset coast. CCTV records her arrival, but not her leaving. The missing woman is a former silver screen actor.

As with other cases Raker needs to find out if her disappearance is linked to her past or the secrets she may know about others. Has she chosen to go missing or has she been abducted? Does she want to be found? Raker’s investigations bring him into contact with some unsavoury characters in the movie business past and present.

Weaver has an adroit writing style that makes this novel difficult to put down. It moves at a cracking pace that never lets up – and neither does the excitement or the intrigue. The gradual reveal of the mystery is full of surprises and with countless mis-directions with the story seen from the seeker’s rather than the missing person’s perspective.

Some crime writers complain that mobile phones and internet access play havoc with their plot lines so choose to set their stories around pre-computer datelines. Weaver allows Raker to engage fully with new technology, exploiting it to access information, contacts and clues. It also helps drive the narrative. This may be a 21st century investigation but Raker still relies on established routines like interviewing witnesses, collecting evidence and making foot-slogging enquiries to solve the mystery.

This is the seventh novel in which we accompany David Raker and there are neat references to his back story and previous outings starting with Chasing the Dead in 2011. Tim Weaver writes and presents the Missing podcast about why people disappear and how investigators track them down. His observation of real cases must give him unique insights into the world of the missing and help provide material for his fiction.