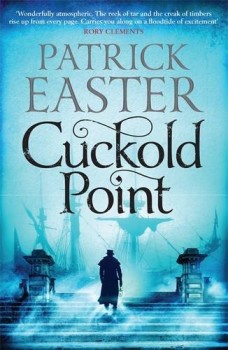 River policeman Tom Pascoe tries to track down a consignment of stolen silk and becomes involved with brutal criminals and international espionage in a case which threatens his life, his family and his country.

A declaration of interest! I’ve been a Tom Pascoe fan since he burst onto the historical crime scene three books ago in The Watermen. There’s something incredibly genuine about the northern boy who rises to become master and commander of a Navy sloop of war, then tossed on the scrapheap by the savage Admiralty cuts at the end of the 18th century, rebuilds his career as one of the five ‘surveyors’ of the river police, founded by Thameside magistrates John Harriot and Patrick Colquhoun in 1798.

As the series has progressed, so has Pascoe. He is still as tough, applying his hard-won naval knowledge to the business of policing, but is now a much more rounded character, changed and in some ways mellowed by setbacks and failures, the death of his wife and his own battle with the bottle.

In this fourth adventure he is more self-aware, more attuned to how his actions affect others and the kind of leader any sailor or constable would follow anywhere. He needs to be. At the time of this story, merchants were losing an estimated annual £500,000 – more than £50 million at today’s prices – of stolen cargo from the Pool of London. Of around 33,000 workers in the river trades, a third were known criminals. Pirates and thieves abounded. Violence and murder was common in the grimy, deprived warren of streets and waterways on both sides of the river.

Colquhoun persuaded the West India Planters’ Committees and the West India Merchants to fund the 50-man force – Britain’s first full time police. They met a hostile reception and a 2,000-strong mob tried to burn down the Wapping office – with the police inside! An officer died.

Now, thanks to Pascoe and his colleagues, there is some sense of law and order and a real chance that the worst of the criminals will wind up on the gallows and with their chained bodies exposed to three high tides at Rotherhithe.

A year after the formation of the force, in France the Directory is on the verge of collapse and urgent talks are going on to avoid a war with America and recruit them to the French cause against Britain.

The plot revolves around documents, which could embarrass the Americans, even plunge three countries into war, smuggled out of France in a shipment of raw silk. A story which runs as fast as the Thames under London Bridge involves informers, thieves, bully boys and spies, crime, diplomacy and espionage.  A series of unexpected twists keeps you glued to the page.

Patrick Easter’s attention to historical detail is, as always, first class and he captures the atmosphere of the time and place well. His key characters are real people doing real jobs. Others are solidly based on reality. He makes it all come alive so that you can smell and feel the filthy water of the Pool or the sordid and violent drinkers, brothels and back streets of Southwark or Wapping. Everything carries a ring of truth: motivation, dialogue, settings, even the often violent action.

There are some interesting supporting characters as well, from both sides of the law. Pascoe’s Polish-Jewish assistant Sam Hart again plays a key role and new characters appear, with the author keeping you guessing as to their importance. But it is the great river itself and the varied cast whose work and lives depend on it which grabs and holds the readers’ attention. No one has captured the feeling of the Thames as well as Easter.