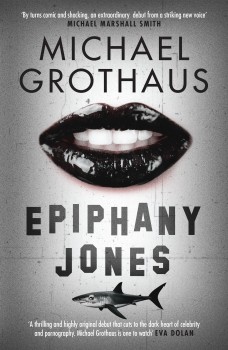 Jerry Dresden, deeply troubled and unhappy, is accused of murdering his work colleague and of stealing a Van Gogh painting from the Chicago museum. While on the run he becomes involved with Epiphany, an emotionally damaged young woman who listens to voices from God.

Jerry gets a dead-end job at the museum in Chicago, with Roland’s help, his father’s former employee.  Very soon though Roland is found dead, and his protégé becomes accused of his murder and of stealing a priceless Van Gogh painting on loan from the most influential Hollywood tycoon.

Soon he encounters one of his most frequent figments of imagination: Epiphany Jones, a thin young woman with a mutilated ear, raven-black hair and a disturbing inclination to listen to God’s voice. She blackmails Jerry into believing that she’s got a tape recording, a proof of his innocence.

Although initially Jerry considers Epiphany not to be real, he is on the run from the police and so follows her to Mexico where another shocking discovery awaits: an extremely well-oiled sex-trafficking machine, making big money from buying and selling girls to film industry moguls. Epiphany is one of their sex slaves, intensely scarred emotionally and physically but refusing to be a victim. As these two extremely unhappy people travel across the ocean to Portugal, and eventually end up in the glittering Cannes, their love-hate relationship exposes a shocking secret connection linking their lives.

Epiphany Jones is a challenging book that left me with an overwhelming sense of sadness and anger, and it should come with a mental health warning. You might not be able to stomach the distorted view of the usual comfortable world of celebrities, as its underbelly delivered by the author is not a pretty sight despite the presence of international film stars and beautiful people. Based on the disturbing reality of sex-trafficking that the American journalist Michael Grothaus investigated, this debut is a cross between dark comedy and hard-hitting reportage pulling together tense gripping narrative, unusual but strong characters and a powerful message. It’s also strangely outrageously entertaining with the black humour softening the repulsive graphic sex scenes and gruesome violence.

With all the attributes of a great blockbuster Grothaus’ debut could easily be transformed onto cinema screens all over the world and become another Hollywood epic. However, there’s a small issue of tearing Hollywood apart: its ego, superficiality, desires, lies, secrets and horrendous treatment of women and girls. Deeply damaged Jerry and Epiphany fight against it.