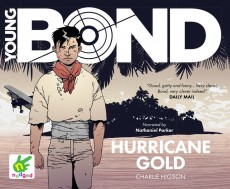 On an island full of criminals, the young James Bond has to face a series of terrifying ordeals to win his freedom.

James Bond is taking a break from his schooling at Eton to accompany his aunt Charmian on a trip to Mexico. Much to his disgust, James is left with the family of Jack Stone, a war hero and flying ace, while Stone flies Charmian to the Mayan city of Palanque. James is stuck with Stone’s spoilt, stuck-up daughter Precious and her irritating young brother Jack junior, known as JJ.

While a devastating hurricane rages, the Stone mansion is raided by gangsters who steal the safe. James and the two children hide from both the thieves and the storm, but later, as they try to escape from the wrecked town, Precious and her brother are kidnapped by the ruthless Mrs Glass. James joins the gang masquerading as a young pickpocket who bore a close resemblance to him and who recently died.

Mrs Glass gets her hands on some important documents from Stone’s safe, and uses these as her passage to the island of Lagrimas Negras, a safe haven for criminals – providing they can pay their way – owned and run but the villainous El Huracán. Precious is determined to retrieve her father’s papers back and get revenge on Mrs Glass for nearly killing JJ, and James refuses to let her go alone. But once on the island, it’s made clear to the children that there is no way they can ever leave.

In Hurricane Gold, the young James Bond is as tough and resourceful as ever. Despite the fact that he can’t stand Precious, his chivalrous streak refuses to let her go into danger by herself. To his surprise, Precious turns out to be equally tough. Together the two teenagers have to brave a series of increasingly deadly ordeals in the hope of being allowed to leave Lagrimas Negras alive if they can survive La Avenida de Muerte - the Avenue of Death.

There’s an increasingly real sense of danger in the book, as Charlie Higson ramps up the tension in each of the challenges James and Precious have to face. Strangely, despite the presence of crocodiles, scorpions, a jaguar and army ants, the one that creeped me out the most was the one where they had to swim through a vat of honey!

Nathanial Parker’s narration does a good job of conveying the horrors of the Avenue of Death without every becoming too frantic. His voice has an impressive range, from the deep, gruff tones of El Huracán to the higher pitched, cool voice of ice-cold Mrs Glass, only occasionally slipping into a somewhat nasal delivery for Precious. Parker’s at his best though, portraying the frightening descent into madness of the badly injured thug nicknamed Whatzat, a man who’d been too close to too many explosions.

The Young Bond books invariably deliver plenty of action and Hurricane Gold is no exception. The characters are never one-dimensional, not even the villains, and the climax is both skilfully drawn out and expertly delivered. Bond never disappoints, not even as a teenager!