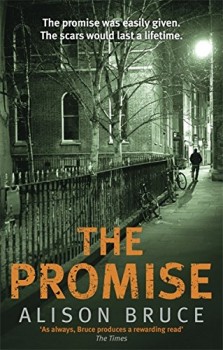 Maverick DC Gary Goodhew returns to duty after injury to help investigate the strange killing of a down-and-out and part-time informant and finds a chain of events which all point to an obsessed killer.

I’ve been a fan of maverick DC Gary Goodhew since his appearance on the crime scene, but this sixth story in the series makes me wonder if Alison Bruce isn’t running short on ideas for her conflicted, obsessional, but intuitive hero. While the plot is fast-paced, inventive and original, it also appears confused and quite outlandish – and not for the first time in the series, I found myself thinking that Cambridge was a most unlikely setting as a hotbed of international crime and warped serial killers.

At the end of Book Five, Goodhew’s future was in the balance. Forced to take sick leave after injuries, he was considering whether to continue his career with the police. His return to work is encouraged by his under-rated colleague Sue Gulley, but it is the murder of his informer Ratty, a harmless, but intriguing down-and-out, that sparks his decision.

Bruce’s descriptions of the homeless community are poignant, but Ratty’s murder is not the random attack it first appears, but one of a series that draws Goodhew into an enquiry that is beyond anything he can imagine. As the body count mounts, it is runs parallel to the story of injured Afghan veteran Kyle Davidson, a small-time criminal badly affected by his experiences – and whose involvement in the investigation is unclear, complicated by his growing paranoia.

There is also a back story involving Goodhew’s grandfather, known to some of his colleagues but of which he is completely unaware. Gully wants to tell him, but is worried that doing so would impact on both working and family relationships.

As always this is a solid procedural, with the relationships between Goodhew and his fellow officers adding to the story. The imminent retirement of Detective Inspector Marks and the veteran station sergeant Sheen add an extra element as the by-the-book and arrogant Kincaide, now a Detective Sergeant, tries to establish his own simplistic authority.

The story works well enough as a standalone, but constant references to past incidents make it more difficult to understand either Goodhew and his idiosyncrasies or even the more straightforward Gully. The pace of the plot gradually ramps up, with enough separate themes to keep the reader both engaged and guessing. In a way these parallel themes detract – particularly the story Davidson’s teenage sister Leah, a determined and strong girl who is in many ways the anchor of her dysfunctional family – but if you can keep everything straight in your head this a clever and carefully constructed plot with a surprise ending for several of the characters involved.

Although nowhere near as brutal as many modern crime stories, there are some descriptions of mutilations and body disposal best avoided if you are particularly squeamish nature. Fortunately Bruce does not exploit these any more than is necessary to build up a picture of an obsessive and paranoid killer.

Despite my caveats, this is a solidly good read written at a pace not so fast that it is hard to keep up with the action while leaving no time to ponder clues. The reveal and denouement are dramatic enough – and there is a nice teaser to take you into the next in the series.