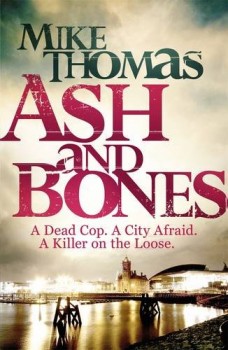 A plain clothes officer is shot dead in a raid and the original suspect left in a coma. CID trainee Will MacReady is desperate to help, but ignored by his colleagues, follows his own leads that lead the detectives down a dark path.

Mike Thomas brings the world of the police to authentic – and often – shocking life.

His debut Pocket Notebook was better than good, telling the tale of a fireams officer going off the rails. The follow-up Ugly Bus was a minor classic, a foul-mouthed, warts and all story of the crew of a Territorial Support Group van, a compelling blend of darkness and humour reflecting the problems and pressures of front line policing – now picked up by the BBC who are turning it into a six-part serial.

How often can an author come up with something as unique as those standalones? But this introduction to trainee Cardiff DC Will MacReady, the first in what promises to be a fascinating series, tops the lot.

On his first day in the department a senior Detective Sergeant in shot dead in an early morning raid and the target, also shot, is left in a coma. With the city in shock and the police grimly determined to find the killer, Will is desperate to help. Largely ignored by his colleagues, who use him as a glorified tea-boy and gofer, he begins to investigate on his own and discovers a series of clues which lead the team down an increasingly dark path.

But his discoveries come at a cost. His attitude first lands him in trouble, then an officer is seriously injured because of Will disobeying orders. While Thomas allows his protagonist some leeway, he is quick to stress real policing involves working as a team.

I’m not going to say any more about the plot of the best crime/police thriller I have read for many years. It is a tribute to Thomas’ skills that it is not until well into the story that the pieces start to fall into place. It’s everything you want in a thriller. MacReady, despite his personal problems, is never a cliché, but it is the sheer authenticity of the characters, the setting, and the dialogue which makes this so special.

The leanness of his writing keeps the story hurtling along, gradually pulling together two disparate plots. The format allows him a protagonist and a small support group of recognisable and well-drawn characters, all of whom can be allowed to develop in later episodes. The backgrounding is brilliant. Cardiff comes alive – surely some of the fringe characters, let alone the situations and settings are drawn direct from Thomas’ memory of his time on the street?

But it is the changing face of police work and crime itself which makes this such a winner. His criminals are totally realistic, either drawn into their lifestyle through need or greed or the cold-eyed, vicious and heartless leaders of organised crime. As a crime reporter for many years and with friends of all operational ranks in The Job, I recognise every one of his coppers. The jaded cynicism of some contrasts with those trying to hold onto their humanity – such as Will and the talkative and determined lesbian Detective Sergeant Charlotte ‘Charlie’ Becks.

Thomas pulls no punches. The problems, the shortcomings, the friction between the ‘Woolies’ and the ‘Colouring In Department’, united only by their contempt for the braided idiots of the PC dream factories that are force headquarters, where flow charts are created, buzzwords exchanged and endless meetings discuss vital matters as how to hold an efficient meeting, are presented as the awful facts they are.

Some readers may need a police slang dictionary, but the acronyms and terminology add to the impact of this brilliantly observed, sharply written and superbly realistic story. Fans, myself included, will look forward to Thomas’ next instalment, but I suspect he may not be too popular at the Bridgend headquarters of Heddlu De Cymru!