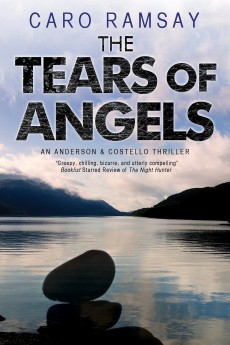 The Tears of Angels

A gruesome murder forces DCI Anderson and DI Costello to reopen an old case into the violent death of two boys.

Scotland, in the hands of Caro Ramsay, can be a grim place. A 92-year-old woman is deliberately set alight and burned to death in her own home. A woman going out into her fields one morning finds a severed hand tied to a rope attached to one of her horses. It appears that a man was tied between the two animals and dismembered when they were driven apart.

Evidence found on the dead man leads the police to believe that they’ve finally caught up with Warren McAvoy, someone they’ve been trying to find for over a year. The man is believed to have murdered two boys on an island in Loch Lomond, and there’s a possible connection to an earlier death of a child there as well.

The Tears of Angels has as many twists and turns as some of the single-track roads of the Scottish Highlands. Several stories twine expertly together, drawing every closer whilst still managing to remain tantalisingly apart. DCI Colin Anderson and the ever-sarcastic DI Freddie Costello pick their way through the case, doing their best to keep the press at arm’s length. Which never turns out to be an easy job, especially when it turns out that there has been a massive case of mistaken identity.

Anderson, never the liveliest of characters, is struggling with the aftermath of an affair that’s nearly destroyed his marriage. Costello is as sharp as ever, and her caustic asides provide some light relief in what is a fairly unrelentingly dark narrative. To make sense of the death of the man they believe to be Warren McAvoy, it’s necessary for Anderson’s team to go back over the original investigation into the death of the two boys, something that doesn’t go down well with the original team. Things take a further sinister turn when the detective in charge goes missing.

Tears of Angels is complex but Ramsay always plays fair with the reader and the reveals, when they finally come, are never wholly out of left field, which always makes for a more satisfactory read. There’s little by way of unnecessary exposition and on a couple of occasions I did have to go back a few pages to check I was following everything – I was probably just reading a little too fast at the time to find out what happened next!