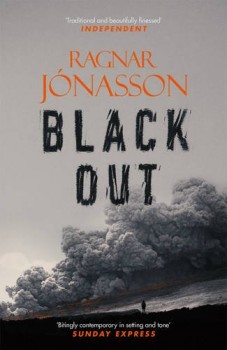 A body of a murdered man is found in a remote location on the shores of a serene fjord in northern Iceland. Young policeman Ari Thór Arason investigates the case while a reporter from Reykjavík escapes the volcanic ash cloud and makes her own enquiries.

A body of a man brutally beaten to death is found near an unoccupied house in a remote location on the shores of a tranquil fjord in northern Iceland. The victim Elias Freysson worked as a contractor on the tunnel between Siglufjörður and Héðinsfjörður but a bag full of money left at this flat implies that he might have been involved in some other profitable but risky business.

The investigation is led by the police team in a bigger town Akureyri. Together with his boss, Inspector Tomas, the young policeman Ari Thor Arason doesn’t miss a chance to follow any possible leads. Hlynur, the third member of the entire Siglufjörður police force, is left manning the station and battling with his own overpowering demons from the past.

At the same time a young reporter Isrun escapes Reykjavík and the ash cloud from a recent volcanic eruption hanging above the town, in search of a good story and an answer. With the idea of ‘a man behind the victim’ Isrun approaches colleagues and acquaintances of Elias and it soon becomes clear that she also hides some secrets. Her journalistic investigation runs along the main conducted by Ari Thor. Puzzle pieces of various flashbacks and self-analysis fall into place culminating in a shocking discovery of another life nearly lost.

Ari Thór’s interest in the murder gives him a distraction and opportunity to prove himself once more, while trying to establish his position within the small police force and working out his reasons to stay in this quiet tight-knit community in Siglufjörður. But he feels restless and doubtful, questioning his motives. Also, he wants to be closer physically to his girlfriend Kristin. They are living apart, and their fragile non-existent at this point relationship is explored in depth. Following Ari Thor’s doubts and indiscretions in Snowblind, Kristin decided to move to Akureyri where she secured a small flat and job in the local hospital.

Blackout, third in the Dark Iceland series published in English, is set in June 2010, shortly after the real eruption of volcano Eyjafjallajökull had spewed out ash cloud which paralysed air traffic around Europe. Chronologically it follows Snowblind but is set four years before Nightblind, already published in English, brilliantly translated by Quentin Bates. The novel feels like a slow-burner of a thriller: the narration spans only two days and there is definitely a sense of terror and urgency as everybody involved in the investigation fights against time. The interludes within the main plot slow down the hunt for the killer but are necessary to give psychological background for all characters.

Again the weather and the locations are the heroes of the story. Though the bright summer full of constant light is as far as possible from the relentless darkness of winter, the mood is positively chilling. A constant threat of a new eruption affects everyone. Blackout refers not only to the physical darkness, reminding people of the nature’s powers; it also symbolises the state of mind: despair, depression and effect of keeping secrets. Ragnar Jónasson delivers a masterclass in painting detailed portraits of his characters: some of them never learn from the past and never achieve peace of mind.