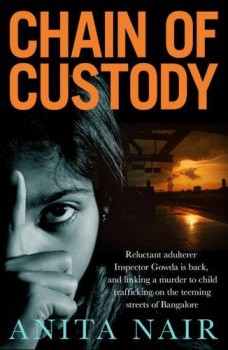 Inspector Borei Gowda investigates the death of a lawyer, and uncovers a connection with the disappearance of the daughter of his cleaner.

After a prologue in which Inspector Gowda is called to the scene of the murder of a prominent Bangalore lawyer, we hear episodes from the lives of several others, which eventually intersect. Gowda, together with his new assistants specialising in child protection Santosh and Ratna, assemble horrific evidence of child-trafficking.

One of the voices (in the first person) is Krishna, a young adult once sent to work in a brickyard at the age of six, who now gathers run-away children on behalf of a ‘thekedar’. Another is Pujari, a man who arranges child prostitutes for the wealthy and well-connected: Pujari has a disabled wife, Gita, whose needs he considers justification for his activities. A third is Moina, a young teenager used as a prostitute who records the arrival of Nandita, the 12-year-old daughter of Gowda’s cleaner.

We hear first-hand from the children who suffer from this pernicious trade. Tricked by other children suborned by their captors, seduced into compromising circumstances by older youths, or just snatched off the street, these kids are tipped into a hell from which escape is very difficult. While there are adults who seek to stop the trade, the general tendency of the authorities is less than supportive; sometimes even participating in it.

Inspector Gowda makes his second appearance here after the success of A Cut-Like Wound. Irascible and temperamental, he has many causes for discontent. His marriage is a running dispute, and even with his wife working away, he cannot feel comfortable in his affair with Urmila, a child welfare worker. His son Roshan is disturbed by his parents’ rows and the preoccupations of a 20-year-old make it difficult for Gowda to find a connection with him.

Gowda is based in Neelgubbi, a Bangalore suburb rapidly expanding with new enclaves for the well-paid and much squalor in the older parts. His immediate superior Assistant Commissioner Vidyaprasad is an obstructive bureaucrat, demanding top priority for the lawyer’s murder over child trafficking, even when Gowda and his staff are getting close. Luckily, Gowda has several excellent subordinates who revere the man despite his frequent frowns. Gowda rides around on his motorbike ‘Bullet’ which gives him a certain distinction.

The author creates a very believable protagonist in Gowda, a man with many failings but dedicated to redressing the problems of the oppressed. The picture she provides of the cogs in the child-trafficking machine is also sketched with some precision. Some are out-and-out evil, but most are drawn with enough balance to explain how people of no great bad intent can end up participating in this cruel trade. The amusing side of Inspector Gowda provides only a partial antidote to the bitterness of such revelations.