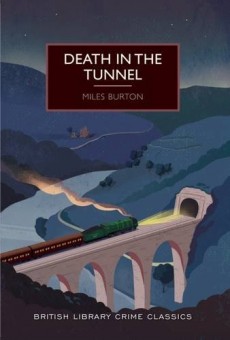 Death in the Tunnel

Sir Wilfred Saxonby is found dead on a train, alone in a locked first class carriage with a gun close to his body. There is no reason for suicide and a baffled Inspector Arnold calls on Desmond Merrion – a criminologist and amateur detective – to help him untangle the puzzle.

Continuing to delve into the Golden Age of the detective story, the British Library has released two of the best murder mysteries by Burton – an author who remained something of a mystery himself for more than 40 years.

Miles Burton was just one of a series of pen names used by Cecil John Street, who died in 1965. Street produced more than 140 novels and was at the height of his fame in the 1930s as a contemporary of Agatha Christie and Dorothy L Sayers.

This classic ‘locked room’ mystery, which first appeared in 1936, opens in the first class of a train – a setting much in vogue at the time – but unfortunately for Street, was somewhat overshadowed by Christie’s Murder On The Orient Express published less than two years before.

Sir Wilfred Saxonby, semi-retired chairman of a successful import company, is found dead in the locked first class coach in which he had travelled alone from London. A gun, bearing his initials, is close to his body. Suicide seems the obvious answer, yet it seems so out of character for a man of Sir Wilfred’s character, and with a number of unanswered questions, the local police refer the case to Scotland Yard.

Enter the dour and methodical Detective Inspector Henry Arnold – a plod of his time in every sense of the word –  good at his job, but absolutely incapable of thinking outside the police box. He too becomes convinced that this is not the simple suicide it appears. But if it is a murder, he must first work out the how it was committed, let alone the question of whodunit.

Arnold suspects an elaborate conspiracy and calls for help from his old friend Desmond Merrion – a criminologist and amateur detective known for his brilliant mind, arcane knowledge and imagination. Merrion, independently wealthy, an injured hero and intelligence agent from the First War, had been introduced to readers in earlier Burton/Street mysteries. He is a fine example of that uniquely British line of amateur gentleman sleuths which produced Sherlock Holmes and Lord Peter Wimsey.

But unlike Holmes, whose relationship with the unfortunate Inspector Lestrade was one of, at times, scarcely concealed contempt, he is happy to put his abilities at the disposal of his police friends. His relationship with Arnold, the steady worker with all of the resources of the force behind him, is one of the key sub-plots and their mutual respect makes them a great team as well as a fine example of tolerance.

Together they assemble a series of small pieces of evidence, in themselves almost insignificant, to unravel a plot with more dead ends than the Hampton Court maze.

It is almost impossible to say anything about the story without giving too much away. But it is well written and exceptionally well plotted, a classic example of the puzzle type of whodunit where the reader follows the detectives step by step through the investigation.

If you want a glimpse into the psychology of either the killer or his victim you won’t find one, but there is a solid motive and the psychology is there, but very simple, reflecting a much more simple time.

There’s not a lot of action, rather a case of unfolding the layers of a puzzle. The small clues which Arnold and Merrion follow, the theories as to what happened, how, why and by whom are painstakingly teased out, and the reader must somehow keep track of where those clues seem to lead.

Despite what must be the most plonking and mundane first paragraph of any novel ever written, this is a surprisingly good read which should appeal to all amateur sleuths as well as being an interesting social history, highlighting cultural mores and technologies old-fashioned to us now, but current at the time of writing.