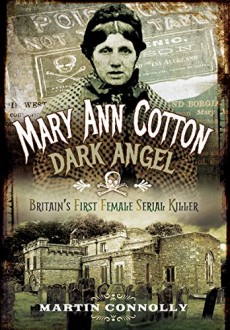 A methodical account of the life of Mary Ann Cotton, the woman often labelled as Britain’s first female serial killer, which casts new light on that claim.

Martin Connolly is to be praised for the depth of his research into this intriguing true story of poisoning from Victorian England. Mary Ann Cotton has been labelled as Britain’s first female serial killer and the West Auckland Borgia. The author has returned to a plethora of primary sources to re-examine those epithets and to reconsider the trial verdict of 1873.

His research shows that Mary Ann was guilty of forgery and theft, was married four times (once bigamously), had a lover, had at least 12 children, was tried for the murder of her stepson and executed in 1873. In almost academic detail, but always in a very readable style, Martin Connolly also details a series of exhumations that suggested to many that Mary Ann might have been responsible for the deaths of more than 20 people.

The book is illustrated beautifully with location photographs and maps of the local area, contemporary newspaper cuttings as well as copies of the relevant census entries and birth, marriage and death records from the local Methodist churches. Connolly layers flesh on this skeleton to paint a thought-provoking picture of everyday life for the poor in Victorian England. The book develops the tragic life story of Mary Ann up to, and including her trial and execution.

It is in Martin Connolly’s reworking of the trial that the depth of his research is readily apparent. In his own words, he has ‘read every newspaper account of the life and times of Mary Ann, in newspapers from all over the UK, including those in Guernsey.’ The inclusion of images of some of these sensationalist reports is particularly interesting and gives you an idea of what Mary Ann was up against in her attempt to defend herself. Combined with original documentation from The National Archives and Durham Records Office, he is able to view the details of the trial with a neutral approach and to reassess it in the cold light of the 21st century. His conclusions may well surprise you.

The book concludes by considering those who were part of Mary Ann’s life story and trial but outlived her and raises further interesting questions. This chapter also includes details of the daughter she gave birth to in Durham Gaol and her children and their new life in Canada.

Martin Connolly has made this non-fictional account of Mary Ann’s Cotton come to life. He is to be commended for a fascinating and very engrossing read.

The story of was also aired on ITV in November 2016 in the UK. However, an alternative author’s (Professor David Wilson) interpretation of the historical evidence was used for the programme. Consequently, the two-hour long TV programme reached a very different and opposing conclusion from that of Martin Connolly and this was introduced early in the TV programme, in contrast to Connolly’s teasing and very methodical approach. Although it was an entertaining analysis of the subject, ultimately I was disappointed in the ITV version of Cotton's story.