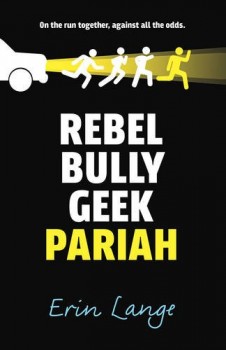 Four very different teenagers who don’t even like each other are forced onto the run after police break up an illicit drinking party.

Sixteen-year-old Sam Cherie is a loner, always on the outside of a group but never belonging, never invited to join in. Sam's mother is a recovering drug addict who has been in and out of both rehab and prison for almost as long as she can remember. At one stage or another, Sam's mother has pawned everything that was ever of value to either of them. But her mother has been sober now for four years and Sam has marked each anniversary by buying back something of value. This year is no exception.

In the hope of reuniting her mother with the violin she used to treasure, Sam falls foul of Andi, once one of the ‘Barbies’, the cool girls that all the others want to be like. But Andi, who’s now sporting dreadlocks and combats, doesn’t care about courting anyone’s approval any longer. She shoplifts the violin and then gatecrashes an illicit teenage drinking party down by the river. York, a typical ‘jock’, is the bully of the title, and his brother Boston, the archetypal geek, clash over York’s intention to drive home after drinking, and Boston ends up throwing the keys in the river

Sam, in hot pursuit of Andi, ends up in trouble through no fault of her own when the party is broken up by the police. In their haste to get away, they take possession of a car with the keys still in the ignition, and Sam finds herself being dragged along, part of a group for the first time in her life. In their haste to get away, York accidentally runs down one of the police officers, and the four teenagers realise their stolen car is a police car.

Each of the runaways is carrying enough emotional baggage to fill the boot – or as this slick, fast-moving book hails from the US, I should say trunk – of a decent-sized family car, but what they actually find in the car catapults them into an even bigger nightmare than car-theft and possible cop-killing.

Andi, York, Boston and Sam each live up to the term assigned them in the title as the rebel, bully, geek and pariah of the title, but as the story progresses, they each become far more than just a stereotype. York, haunted by something done in anger on the spur of the moment, has flashes of empathy. Boston is fiercely-protective, despite being the younger of the two. Andi seems as hard as nails on the surface, but there are brief flashes of a possibly softer centre. Sam, the narrator, has spent most of her life making excuses for her mother, always covering up the disfiguring scars on her head caused by an accident at home while her mother was attempting to brew crystal meth on the stove in her kitchen. As a result, Sam has always been a loner, keeping a hat pulled down over her scars.

Rebel, Bully, Geek, Pariah tells the story of how a disparate group of teenagers who don’t even like each other go on the run and gradually, almost imperceptibly, start to form real bonds, as a fragile trust grows between them. I was quickly drawn in by their dysfunctional dynamic, as they go on the road trip from hell, pursued by just about everyone. Sam’s deep desire to be part of a group and develop real friendships is sensitively handled and I found myself clinging to a slender and seemingly ever-more fraying thread of hope for her and her mismatched companions.

Erin Large does a good job of getting under the skin of her teenagers and making them come alive. The book’s great strength is that it quickly made me care about all four of the title characters. Large adroitly juggles a subtle mix of humour and pathos and delivers a moving and thoughtful story of friendship and love.