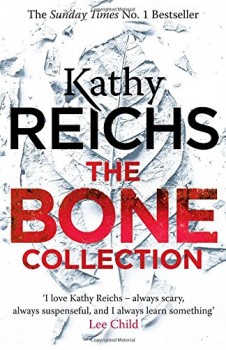 If you’re new to the life and work of Dr Temperance Brennan, this collection of four short stories is a great place to start, as it includes First Bones, a prequel to Déjà Dead, the book that launched forensic anthropologist Tempe Brennan onto the crime scene. But even if, like me, you’ve followed her from the start of her career, it’s still an irresistible opportunity to find out how and where it all began, although somewhat strangely, this collection ends, rather than starts with that story.

The Bone Collections gets off to a flying start with Bones in Her Pocket, a story that takes Tempe to the edge of an icy lake, in search of more bones to add to the puzzle of a man’s fibula, tibia and two vertebrae discovered in the same location a few weeks ago. It’s soon obvious that the latest body isn’t going to help solve that problem and instead, Tempe is thrown into the middle of a search for a missing woman. Nothing is ever simple in the world of human bones and in this story, there’s a particularly horrific cross-over into a very murky world involving human exploitations of animals. Read it, please. It’s important, and it’s an area that few people think deeply enough about, although I can’t say more for fear of spoilers.

In Swamp Bones, Tempe is more worried about heat and insects than icy water. She’s now in the Florida swamps, solving a riddle wrapped up in a bird, wrapped up in a python. It’s time for the annual Burmese python hunt, an attempt to reduce the vast number of non-native snakes living and breeding in the Everglades and consuming other creatures at an alarming rate. I was totally fascinated by the contents of the snake’s stomach, even though I wouldn’t fancy getting up close and personal with the decomposing mass so lovingly described! When human finger bones are found in a bird that’s been eaten by the snake, Tempe’s holiday with a friend ends abruptly.

Bones on Ice moves away from animal-related issues and turns to human impact on the environment in a very different area: the problem of the number of dead bodies left behind by climbing expeditions on Everest, the world’s highest mountain. Here, Tempe must investigate the death of a young female climber whose body has been recovered from the mountain after several years and the first problem she has to handle is to determine whether the body is even that of the correct woman. As ever, in Tempe’s world, there are no easy answers.

First Bones takes us right back to the beginning of Tempe’s career, but not before it’s made clear that in the here and now, Tempe is about to face a huge loss of her own, and the rest of this story carries with it the shadow of what’s to come. But for a while at least, it’s possible to put that aside and revel in the dark humour of Tempe’s first encounter with the ineffable ‘Skinny’ Slidell, the detective who’ll be at her side in so many future investigations. Seeing Skinny through her eyes for the first time provides as much entertainment for the reader as it does frustration and irritation for Tempe. As sidekicks go, he’s one of the best, and plays well off her, even when they’re immersed in horribly burned human remains and a complex case of revenge.

The Bone Collection is endlessly fascinating, even when it’s delving into the darker areas of man’s inhumanity. Something that would be an info dump in anyone else’s hands simply has me clamouring for more. I could have read about the contents of a snake’s stomach for hours, and I felt just the same about her descriptions of death at high altitude. Each story is followed by an author’s note that explains how it came about and gives a little more by way of background, and I read these equally avidly.

Kathy Reichs’ own experiences shine through at all times and she writes with an authority that few can match, but these are not dry takes from a textbook. Even in the middle of death at its most gruesome, life finds a way to shine through.