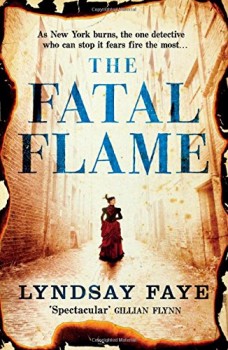 ‘Copper star’ Timothy Wilde chases down an arsonist and violence and murder follow as he and his brother follow the trail around the dangerous and corruption-filled streets of a pre-civil war New York.

If Lyndsay Faye could have been accused of a touch of political correctness in the second of the compelling Timothy Wilde trilogy which addressed slavery, she spares the reader no detail of the horrors of late 1840s New York in this brilliant and biting finale.

The underlying themes are the emancipation of women and the sheer scale of corruption of early American politics, where murder was often considered an acceptable way to power. In doing so she has produced a truly epic tale of exploitation, corruption and death in a city at the time the world’s melting pot and staggering under the influx of hundreds of thousands fleeing the Irish potato famine.

Wilde, a ‘copper star’ with the fledgling New York Police Department, whose crime solving skills have seen him become one of its first detectives, is still the engaging and affable character of the earlier books. His experiences have made him more cynical, but he is still often baffled and unsure in both his working and private lives, achieving results as much by his unwillingness to give up and strong moral convictions as by ability.

Here he takes on every crime and vice known to man – from child exploitation and prostitution to murder – aided by his elder brother Valentine, a police captain of dubious morals and sexuality who somehow maintains his equilibrium despite his excesses and his colleagues.

Timothy is tasked with tracking down an arsonist attacking properties belonging to a city alderman and clothing factory owner. The chase leads him through the city’s grimy tenements, drinking dens and brothels into the abomination of the exploitation of immigrants and women and the self-serving and greedy politicians of Tammany Hall, a place which was to become a byword for corruption.

Faye’s brutal and often bloody story is enhanced by the use of ‘flash’, a sort of thieves’ cant – and there’s a useful dictionary! Contemporary quotations from either side of the women’s emancipation debate at the beginning of each chapter further point up the glaring inequalities of early America.

Wilde, often sidetracked by personal issues, dominated by his hopeless love and his ongoing love-hate relationship with his brother, struggles on as several characters from earlier adventures return, including the beautiful, enigmatic and deadly villainess Silkie Marsh.

Faye’s research into the life and history of her adopted home is immaculate – she recreates pre-civil war New York with all its faults and tensions in a totally believable but subtle manner which informs but never intrudes on this complicated collection of interlinked plots. Her disparate characters also carry that aura of reality and the dialogue, even the idealistic Timothy’s frequent internal debates, is crisp.

Her central character is an all-American hero, a genuine, hardworking, loving, kind and moral man who empathises and tries his best to help people and this is a great story which will not only enthral, but also pull at the emotions.

You can read this fine book as a standalone, but with its two earlier parts, even if the second is, in my opinion, a little too politically sensitive, it is an absolute triumph for an author of brilliance and polish.