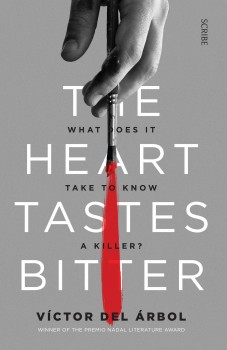 A painter undone by the loss of his wife and daughter in a traffic accident is asked by a woman to undertake a portrait of the man who ran down and killed her son.

Eduardo Quintana is a talented painter whose wife and daughter were killed before his eyes when their car was hit from behind. Years after the event he wallows in grief, and his work no longer has its essential spark. He still paints, though, and is hired by Gloria A Tagger to produce a portrait of Arthur Fernandez, who killed her son Ian when driving drunk.

Eduardo obtained the commission through his agent Olga. It was Olga who identified the car which caused his accident, triggering his attack on Theo, the man responsible, killing Theo and putting his wife Maribel in a wheelchair. Their son ‘Mr Who’, with inadequate parental guidance, has fallen foul of a Chinese gang and prostitutes himself. Eduardo did a stretch for the shooting.

Arthur also served time for his crime, protected inside by Ibrahim, who shares with Arthur a childhood in Algeria during that country’s struggle for independence. On his release, Arthur hired Guzman, a Chilean who once worked as a torturer for the Pinochet regime, to locate his teenage daughter. The daughter, Aroha, despises her parents and has fallen into bad company.

The book plays out around these main characters, slowly revealing increasing amounts about their background, through action moving from the present to the past and back again. All the key actors are haunted by past events, invariably nasty and often traumatic. As we come to understand the history of the protagonists, a knotted web connecting them becomes evident.

A plot so convoluted and so effectively brought to fruition calls for considerable admiration, and brings a relief of tension as the pieces of the jigsaw fall into place. The suspense built up through the first half of the book does, however, call for some patience on the part of the reader, who has to cope with a very large cast of persons connected to the leading players in the drama.

All the actors, large or small, have a story to tell, and this is usually one of desperation, pain, guilt and general unpleasantness. Guzman reminisces about his time in the torture chamber, and his own experiences with interrogators when he fell in love with one of the regime’s victims. Arthur and Ibrahim were sons of combatants killed on opposite sides of the bitter dispute in Algeria, and suffered terribly as a result. Aroha and others suffer abuse which is so graphically detailed as to call for a strong stomach.

It is difficult to escape the conclusion that the author has a somewhat jaundiced view of humans generally. In a significant passage, Eduardo characterises Arthur, Gloria and Olga as frauds, with artificial lives, ‘obsessing over superficialities to cover up their emptiness.’ This is a book unrelieved by any but the blackest humour, and will appeal primarily to those with a Hobbesian take on life.