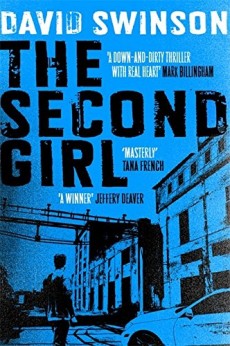 Despite a cocaine habit that forced him to resign from Washington PD, PI Frank Marr is still a great investigator, and doesn’t have to play by police rules.

Frank Marr is a legend in the Washington police, and few people know he was obliged to take early retirement after senior officers got wind of his substance abuse. He still regulates his life with cocaine, alcohol and prescription medications, but manages to perform at high level, working as a PI for his girlfriend lawyer Leslie Costello.

The book begins with Frank eight days into a stake-out of a house used by a gang of young Salvadorans to store the crack and other drugs they deal on-street. When they depart for the day, he breaks in with a view to replenishing his personal stash of coke, but finds Amanda, a 16-year old schoolgirl, chained up. He releases her, and takes her to Costello, immediately returning to the house to extract drugs and cash.

Marr’s unwillingness to wait with Costello for the police generates both mystification and annoyance, but he manages to find a plausible explanation. His success in finding Amanda leads to the parents of a second missing girl, Miriam, seeking his help. He has the same leads as the police, but has two advantages: freedom from red tape, and preparedness to be ruthless in the pursuit of the men who prey upon young girls.

Marr makes an interesting protagonist, an ex-cop with years on the streets of Washington (informed no doubt by the real-life experience of the author), but at the same time able to give free rein to his impulses. These generally tend in a direction one can regard as moral, although his willingness to use violence to extract information, and his non-stop use of narcotics, tarnish his halo.

In any event, the book gets off to an explosive beginning, and zips along with barely a break in pace to the end. The use of the present tense draws the reader in. Aware of the danger to Miriam, Marr is under pressure to find her before her captors kill her, keeping the police onside and feeding them sufficient information to get them to act when he has figured out a way to ensure her safety. Stake-outs, close observation, and dynamic interventions with pressure expertly applied get him near to his goal.

I remain unsure whether such a measured and proficient display of professional skill is compatible with the heavy use of narcotics described. Marr has few friends, and those he is close to, a couple of old police colleagues and Costello, seem to recognise there is something off about him, even if they cannot identify what it is that gives rise to suspicion. But living close to the edge certainly gives Frank an additional dimension, and generates uncertainty as to whether he will hold it together to complete his task. This is one of the most exciting books I have read for a while.