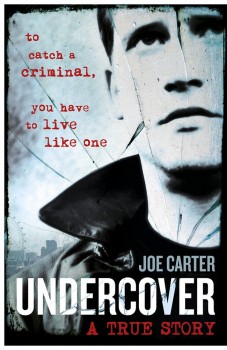 The story of 20 years in the life of an undercover cop.

There’s been no shortage of undercover cop scandals in the UK in the last couple of years. In 2015, in the wake of allegations about the infiltration of political groups where officers in effect led a double life, a public inquiry was set up, headed by Sir Christopher Pitchford. Its brief was to inquire into undercover operations in England and Wales since 1968, as several women had come forward to accuse officers of having long-term relationships with them based on deceit.

All this has provided fertile ground for Joe Carter’s expose of his life and work undercover. The book details his 20-year career infiltrating and working alongside criminals, with the specific intent of bringing them to justice. But despite the lofty aims, the reality is both dangerous and at times squalid. Carter was responsible for doing numerous drug trades, using money provided by the police. It’s clear that he was able to obtain valuable information, but the morality of the tactics employed by the police were somewhat questionable, to say the least.

Carter sets a rather odd tone to the book at the beginning when it becomes clear immediately that although he’s retiring, he’s not exactly on the best of terms with his employers or even his former colleagues. He’s clearly been embittered by his experiences, but I must admit that I found the opening chapters quite off-putting, as they simply left me wondering what he’d done to put quite so many backs up, rather than being impressed by a bloke not afraid to challenge authority.

That side of things becomes clearer as the books progresses. Carter is a man who can handle the stress of difficult situations well, he’s prepared to ignore his bosses if he thinks he’s right and has a tendency to rip the rule book up and throw it out of the window, which doesn’t go down well with his superiors. When I got more into the book, I got more and more intrigued, watching the elaborate web of deceit woven by Carter and other undercover police, both men and women, which gradually ensnares their targets.

Operations last for months, and in some cases, years. It was Carter’s job to get to know criminals, win their trust, become their best friends and then betray them. Carter comes over as a man who could put the problems inherent in all that to one side and get on with the job, but occasionally a chink in his carefully-constructed armour does appear, such as when he’s at a dinner party in an expensive restaurant, knowing that everybody at the table is shortly about to be arrested. On that occasion he’s burdened by the knowledge that he’s also ruining the lives of their wives and girlfriends.

But Carter never remains introspective for long. We learn little of his own home life, except for the fact that he has a wife and children, and that he occasionally feels guilty about his long absences and for deceiving them about the nature of his job. The guilt doesn’t stop him, though.

I would have liked to know more about how many criminals were actually successfully prosecuted as a result of undercover policing, but the book is strangely silent on the aftermath of the arrests that Carter and his colleagues facilitated. Despite that, Undercover: A True Story is a fascinating look at the darker side of British policing. After reading it, you’ll have to make up your own mind about the morality of such operations and whether the ends really do justify the means. For me, the jury is out on that at the moment.