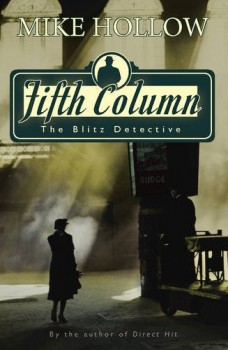 A young woman is found dead on a bomb site, but she is no air raid victim. A post-mortem shows she was strangled. DI John Jago is called in and uncovers a trail of deception, betrayal and theft.

Mike Hollow returns with the second of his Blitz Detective series – and once again the east London borough in which he was born plays a starring role in a convoluted murder mystery set in the rubble of wartime. West Ham, once a minor parish in Essex, became one of Victorian Britain’s biggest manufacturing centres for pharmaceuticals, chemicals and processed foods.

Much of that industry was still there when, in September 1940, Goering’s Luftflotte began the attacks which became known as the Blitz. The concentrated bombing of industrial targets and civilian centres began with heavy raids on London. West Ham, between the Thames and the River Lea and home to the vital Victoria and Albert Docks, took more than its share. The areas of Wapping and Silvertown were almost flattened and thousands killed.

Former BBC man Hollow, who now makes his living as a translator, captures the wartime world of danger, conspiracy, intrigue and deception quite brilliantly and its unfashionable setting makes it all the more believable.

The body of a well-dressed young woman is found on a bomb site. It was not there when rescue teams cleared the demolished building. DI John Jago, and his assistant DC Peter Cradock are assigned the case. The corpse is identified when a company that produces classified military technology, reports one of its staff missing.

A post mortem reveals that the girl was strangled, raising the possibility that her death might be somehow connected to stock going missing from her firm and the rumoured Fifth Column of Nazi sympathisers preparing for an expected German invasion.

In an area where Oswald Moseley’s Blackshirt thugs had received some support, despite West Ham having elected Britain’s first all-Labour council, and in a climate of near invasion hysteria, every lead has to be investigated. But when few people seem to care about the dead woman, including her own family, Jago switches his inquiries to more mundane affairs and uncovers a web of romantic entanglements, deception and betrayal.

The story was inspired by a real event and is an interesting period piece. The principal characters, World War One officer from the ranks Jago and his bumbling and naive, but sometimes surprisingly sharp deputy, are well portrayed and completely in keeping with the time. The support cast too, are all there. The spivs and small time crooks, the ambulance, fire and rescue crews, the RAF pilots from Hornchurch, living each day with the threat of death, and the harassed civilians, facing the same threat from the night’s bombs – like the housewife who has to wipe war dust off her living room mantelpiece every day.

My first job as a reporter was in the area in which the action takes place and there were plenty of people alive who remembered the war all too well. Hollow describes it well and fits it into a cleverly woven, intricately detailed mystery.

If you missed Jago’s arrival in Direct Hit don’t worry. This works perfectly well as a standalone and if you’re interested in one of the most fascinating and important period in our history, or just like a really good period mystery, this is one for you.