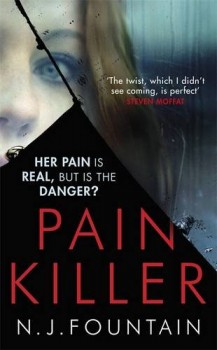 Monica Wood lives with chronic pain after an accident. Drugs blur her memories. But when she finds what appears to be her own suicide note, which she has no memory of writing, she wonders who did – and why?

Some readers may know NJ Fountain as a writer for the satirical magazine Private Eye.Others may have seen his name on the credits for Dead Ringers, Have I Got News For You or the children’s sitcom Scoop.

He is a professional funny man, with awards to prove it. But his debut as a novelist with this atmospheric and creepy psychological suspense thriller is as far from his working life as it is possible to imagine – and gives credence to the old saw that behind every clown there is a tragedian.

This beautifully written, slow burner of a story, shot through with strands of dark humour, is devious as well as being a devastating description of the effects of chronic pain on both patient and carer. It is absolutely compulsive reading with a final twist which will leave you shocked, although quite satisfied with its natural justice.

One time high-flying theatrical agent Monica Wood has lived with chronic pain – which she describes as her Angry Friend – since an accident five years previously. Her days pass in a haze due to the medication which keeps him at bay. Her memory is virtually destroyed by the increasingly powerful drugs she must take. There are brief periods of respite, and during one of these she finds a suicide note which she has no recollection of writing. Her husband and carer explains it to her, but the note still plagues her and at the back of her mind something prompts her to mistrust what she has been told or thinks she knows. As snippets of her memory begin to return, the possibility that someone wants her dead becomes all too real.

The majority of the narration comes from Monica, a brutally honest and matter-of-fact relating of the struggle people in her position find themselves. Most chapters start with her waking up – itself a struggle – to face another day with her Angry Friend. Readers will empathise with her as she desperately tries to live a normal life, knowing it has gone forever.

Fountain has obviously done a great deal of research into the drugs and treatments available for Monica’s condition and his meticulous backgrounding and descriptive skills really does make it horribly authentic.

I passed my review copy to a young friend who lost a leg to a Taliban landmine and suffered other massive injuries. He called it the best description he had ever seen of living with pain. His was, mercifully, a fairly short experience, but he totally empathised with Monica as she tries to live a normal life, knowing it has gone forever. And he laughed out loud at the dark humour, something inbuilt in all barrack blocks and also often used as a relied mechanism by those terminally or chronically ill.

Fountain’s story begins slowly, almost a reflection of Monica’s scrambled thoughts, but as her mind slowly clears, things begin to slot into place and the intensity builds. Her struggle to identify which characters may wish her ill or are forces of good really draws the reader in. The psychological elements are intense and once you face the darkness of the plot you will be hooked.

This is a truly impressive debut with perhaps the most impressive part the accurate and sympathetic depiction of what is almost an invisible illness – from the pain itself to its social and personal implications and its impact on those with loved ones who suffer.