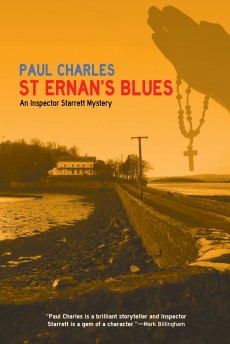 Inspector Starrett tackles the murder of a young man at a home for retired Catholic priests, most of whom have secrets of an entirely worldly kind.

St Ernan’s is a large house situated off the coast of Ireland, a comfortable retreat for Catholic priests who are of retirement age, or who the hierarchy consider it preferable are parked somewhere out of the public eye. Inspector Starrett of the Gardai Serious Crimes Unit is called in when Father Matthew, a young curate, is found dead in St Ernan’s kitchen.

For the convenience of readers, the priests in the home are identified by name and location in a house plan at the beginning of the book. These priests and Eimear, a woman who comes in to clean and cook, represent the only persons with access and are therefore the only suspects. Starrett’s investigations show, however, that several of these suspects have a good motive.

As one of the fathers admits, ‘a dog-collar does not equal divinity. I’m sure we have a gambler, at least one womaniser, a thief, a capitalist, a relative of Joe Kennedy...’ This is amply borne out by the research of Starrett and his staff, and it only remains to find out the connection to the murder. Along the way, enough evidence of wrong-doing is gathered for at least two other prosecutions to be launched.

Starrett is one of several sleuths brought to life by Paul Charles; this is his third outing. It is peculiarly domestic in style; we hear much about his relationship with Maggie, in whose house he lives, his close friendship with the Major, his superior who is dying during the course of the book, and personal detail about his junior officers. At every meeting there is a detailed description of what drinks are brought to the table, what biscuits are produced, and who eats what.

Catholic estates have featured in many crime novels, especially since the revelations of the past few decades, but the sheer range of bad behaviour found in St Ernan’s, and the apparent acceptance of this as only to be expected does strike the reader as somewhat surprising. Whether the author is out to shock a (presumably primarily Irish) readership, or whether he considers the range of activities par for the course would be interesting to know.

The narrative is permeated throughout with a sort of Irish quirkiness/humour, laid on with a rather heavy hand. There is frequent reference, for example, to Starrett’s over-use of the exclamation ‘bejeepers’ and the teasing from his friends and colleagues as a result. The action is frequently suspended to allow Starrett to muse at length on everyday turns of phrase which have caught his interest, such as the derivation of the saying ‘to get on like a house on fire’. The light-hearted feel may appeal to those who like their crime whimsical in tone.