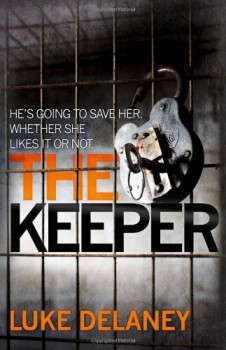 Luke Delaney’s first book Cold Killing was clearly a build-up to a sequel, and in The Keeper, Detective Inspector Sean Corrigan is back and needs to put his ability to get in the mind of a brutal killer to work again. Women are being abducted from their own homes in broad daylight and one has already been found dead. As before, it’s Corrigan who spots a pattern that no one else has seen. The missing women bear an uncanny resemblance to each other and Corrigan is certain that a serial abductor is at work and that he only has a few days to prevent another victim turning up dead.

Whilst it took me a little while to get into Cold Killing, for me The Keeper hit the ground running and rarely flagged. The idea of a serial abductor at work is a chilling one, and Delaney exploits these fears to the full. According a recent article in The Independent, the UK charity, Missing People, which aims to help relatives of people who have gone missing, states that there are about 250,000 missing persons reports filed with the police every year. Of these, many return to their families very quickly, but there are many thousands of others who are never heard of again.  As long ago as 1963, John Fowles explored such a disappearance in The Collector, a book I found horribly chilling, and far more recently, the equally frightening crimes of Ariel Castro in Cleveland, Ohio, came to light. Delaney explores this type of scenario and produces a well-paced police procedural with a difference.

DI Sean Corrigan is a man haunted by his own demons from the past. He has a pronounced ability to get inside the head of the criminals he’s called on to hunt, although Delaney is at pains to make clear that there is no element of psychic powers involved, leaving Corrigan’s character with his feet firmly on the ground. To an extent, the passages where Corrigan visualises crime scenes leave behind a feeling that there is some cheating going on, with a large element of the author projecting his own knowledge into the character's head. But despite that, such scenes are well played.

The only area where the book suffers is in its occasional lengthy passages harking back to events in Cold Killing, events that have led to the book’s other main character, DS Sally Jones, having to live with the aftermath, both mental and physical, of her near-death at the hands of Corrigan’s previous adversary. For anyone coming to the series in The Keeper, they will soon have the plot of Delaney’s first book well and truly spoiled as the villain of the piece is named and shamed very rapidly. Perhaps this is inevitable in some ways, but it was still rather difficult not to feel that too much time was given over to recollections of events in the earlier book.

That criticism aside, The Keeper makes great use of its central premise, and the fate of each of the women targeted by Thomas Keller, the title character, makes for difficult, but enthralling reading. Each of them become all too real, and their fates really mattered to me, sometimes becoming almost too painful to read. Delaney has built well on the foundations laid in his debut novel.