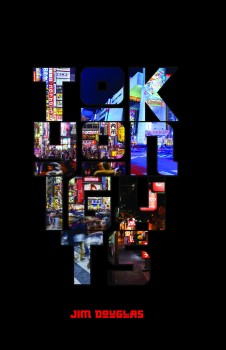 PI Colin McCann visits Japan on behalf of a man whose daughter Natasha died under questionable circumstances, in search of her ex-boyfriend Charlie Davis.

Harold Philips feels that the police have failed to get to the bottom of his daughter’s death at an outdoor party, and hires private investigator Colin McCann to find the answers. Pushing some of Natasha’s companions for information about the night she died, one name re-occurs: that of ex-boyfriend Charlie Davis, an extrovert reprobate drug-dealer.

Davis is discovered to have flown to Japan after Natasha’s death, and Philips agrees to fund McCann’s pursuit. The above is revealed in flashback; the book starts with McCann’s arrival in Tokyo and his steps to get close enough to Davis to press him for the facts about Natasha’s death. For this purpose he applies for a job teaching English in a school where Davis is already ensconced.

McCann is immediately drawn into a whirl of alcohol-fuelled social activity with Davis and Twilly, the owner of the school. Circumstances, and Davis’ suspicions, make it difficult to raise questions, and before McCann has made much progress an unexpected event leads Davis to flee for a second time. McCann again has to use his investigatory skills to get a lead, and eventually tracks Davis to what proves to be a dramatic finale.

McCann’s expedition forms a backdrop to a portrait of Japan, in which its generally exotic nature is compounded by the protagonist’s jet-lag and his over-indulgence in local alcoholic beverages. The author emphasises the strangeness of the country to Western eyes through McCann’ impressions, and this comes across even if some of his observations are commonplace. As the author says in his acknowledgements, the book is something of an ode to Japan.

McCann is more than once treated to a lecture on the differences in thinking between Japanese and Western cultures, without coming to any solid conclusions. Davis and Fuso, a woman friend of his, also dilate on the Western ‘obsession with compromise, safety and longevity’ and advance Blake’s view about the palace of wisdom lying on the road to excess. McCann seems half-persuaded by this himself: certainly he is prepared to forego sleep and sobriety to keep pace with Davis in an attempt to get the answers he is looking for.

If anything, though, the second half of the book seems to suggest that a libertarian approach to life can have its problematic side. Davis’s tendency to unrestrained behaviour is fully demonstrated, such that survival becomes an issue. The stakes immediately become much higher, making for an exciting ending.