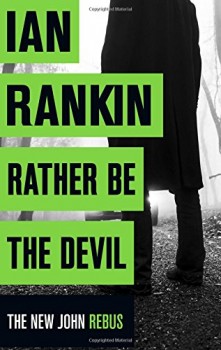 Rather Be the Devil

John Rebus can't keep away from detective work - and investigates a 40-year-old murder and the rivalry between two Edinburgh gangsters.

John Rebus is supposed to be retired. But you won’t catch him with his feet up listening to his extensive music collection (and a very cool one it is. And regulars won’t be surprised to spot that the book title is a John Martyn song). Instead, he’s poking around into a 40-year-old mystery. And as usual he has his beady eye on Edinburgh’s gangster contingent.

Maria Turquand was murdered forty years ago at once of the city’s hotels, the same night as a rock star and his entourage were staying. The killer has never been found.

Meanwhile, Big Ger Cafferty and Darryl Christie are vying for control of the city. And Big Ger is the obvious suspect when Darryl is attacked. An enquiry into money laundering has Darryl in its sights. So it looks like the perfect moment for Big Ger to step in and regain control of his old empire.

DI Siobhan Clarke is hunting whoever attacked Darryl, and has Rebus to hand with his spider’s web of contacts across the city. DI Malcolm Fox is seconded to the money-laundering investigation – although, inevitably, Rebus can’t keep his nose out of that either.

Fox wasn’t strong enough in my view to carry his own book, but he’s now a key member of the triumvirate – and a great deal of the attraction of Rankin’s storytelling is how the three spar off each other.

Rather Be the Devil has a dark streak to it, as both Rebus and Big Ger seem aware of their own mortality. Rebus is coughing up blood and finally acknowledges that he needs to change his lifestyle

At times, the plot threads seem almost incidental. And that’s because this is character-driven crime fiction at its best. Rebus has aged his hero as the books progress – which is why this is a series to be read from the start and to be enjoyed like a fine wine.