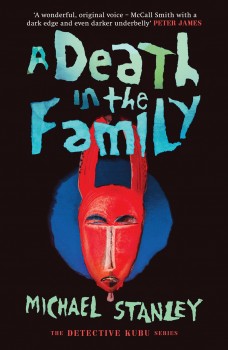 A Death in the Family

Wilmon Bengu is found murdered but his son detective Kubu isn’t allowed to investigate his father’s death. Kubu goes against his superiors but soon needs to follow a series of murders connected to the Chinese owners of a mining company.

Meet Assistant Superintendent David Bengu, Botswana CID’s brightest mind, working in the capital Gaborone. He’s a large man affectionately called ‘Kubu’ (hippopotamus), fond of opera and good wine, understanding his country’s history and traditions while looking into the future, and living a happy family life with his wife Joy and two small daughters, one of them adopted. So one day Kubu is shocked and thrown out of the familiar comfort zone when faced with the violent death of his father, the old and frail Wilmon Bengu, who suffers from Alzheimer’s.

Kubu’s mother pulls herself together to prepare for a proper huge traditional funeral to honour her husband, who was loved and respected by many. Passionate Kubu isn’t allowed to be involved in the investigation but starts his own search for the killer. Shortly after this tragic event another body is found pointing to the apparent suicide of a senior government official. Frustratingly as it is, Kubu follows minor leads and gets to American mining consultant Peter Newsom whose role isn’t entirely clear.

Away from the family drama a trouble is brewing in a small village where the elders have to make a decision whether to accept an offer from a large mining company in return for their land and relocation of residents. Last time it went badly, and so the elders are concerned. Shoshong has seen better times and its inhabitants feel that prosperity might return.

Both American and Chinese developers are fighting for the rights to exploit the land to dig for uranium. They also exploit their local contacts and throw their international weight about to secure what’s best for them, ignoring the locals. Young men are angry and restless, and see the expansion of the mine as an opportunity to finally get jobs, while the older generation is fearful of losing traditions, and being exploited by the foreign companies. Kgotla (a traditional decision-making system in small communities meeting) ends in a tragedy as several men are killed, including the old chief. Yet his grieving son Julius doesn’t induce confidence in Kubu.

Writing duo Michael Sears and Stanley Trollip create a rich vibrant setting for the novel, bringing the powerful beauty and local character of the African country, where greed, corruption and riots still reign. The language is infused with the native Setswana words which add to the atmospheric feel of the book and bring Botswana into the wider literary world. Although the novel might appear to be in the same vein as Alexander McCall Smith’s series The No 1 Ladies’ Detective Agency, it has a much darker dangerous edge, and is an example of an excellent storytelling. We can identify with the protagonist, follow actions of believable characters, and appreciate the ways different people, Kubu and Julius, relate to grief caused by death in their families.

Don’t let the beauty of Africa’s stunning landscapes and friendliness of outspoken locals fool you as sunshine can be very noir indeed.