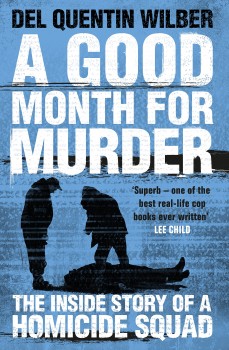 A Good Month for Murder

A factual depiction of a particularly active month for the police homicide unit in Prince George’s County, a suburban sprawl east of Washington, DC.

After several months embedded with the 30 detectives in the Prince George’s Homicide Unit, the author has produced an account of February 2013, when the unit faced a particularly heavy caseload of 12 murders. Wilber, a reporter for the Washington Post, accompanied detectives on these cases and gives a vivid impression both of the officers themselves, and of the processes they follow to identify culprits.

The murders have a depressing similarity, being predominantly by and of young black or Hispanic males, frequently gang-related or drug-related. Most commonly the deaths are by shooting, less commonly knifings, and often arise in the commission of thefts, mostly for minimal gain.

Disheartening as it must be to wade through such stuff as daily fare, the detectives of the unit are remarkably dedicated to finding those responsible, and achieved a clearance rate over 2013 as a whole of 96 per cent. Unlike other units, Homicide are on call 24 hours and when they catch cases officers sometimes end up working days at a time without sleep.

Given the popularity of fictional crime, it is instructive to find out just how much real life corresponds to the illusion. What struck me is that notwithstanding extensive use of crime technologists, street informants are still perhaps the most important source of leads. It also becomes clear that compared with police investigations in books and TV, questioning of suspects is rarely completed quickly. Where there are no surviving witnesses other than the suspect, police can crack the case only by repeated interrogations, using every trick they can think of.

Appreciation of the qualities of the detectives involved does not, however, mean that the book is necessarily a thrilling read. Compared with the fiction, of, say, George Pelecanos, many of whose stories are also set in the Washington suburbs, these tales are basically one-dimensional. We hear nothing from the point of view of the criminal. The action covers too many police officers for us to feel we really get to know them, although the author gives thumbnail sketches with key character features to try to bring them to life.

In addition, the culprit either seems to be immediately evident, in which case the police involvement is largely boring if vital paperwork, or only identified through months of sifting rumours, interviewing and re-interviewing and other uninspiring effort. Compared to fiction, real life is profoundly unsatisfactory: messy and in some cases never producing a clear answer.

For those who like to keep at least one foot rooted in reality, however, this is a pretty fair attempt at conveying the picture from the perspective of the detective on the street. I liked David Simon’s Homicide rather better, although I sometimes felt his subjects a little too good to be entirely true to life; Wilber’s book perhaps gives a more balanced assessment.