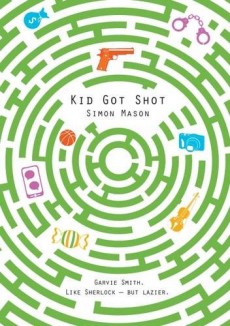 When a teenager from his school is shot dead, Garvie Smith is reluctant to leave the investigation to the local police, especially as he’s sure they’re just not asking the right questions.

I fell hook, line and sinker for Simon Mason’s teenage sleuth Garvie Smith in his strong debut, Running Girl, and have been waiting impatiently for him to slouch back into my life. Garvie has a stratospheric IQ, but is, without a shadow of a doubt, the laziest boy in Marsh Academy.

Garvie smokes, drinks, occasionally takes drugs, and never, ever, turns up on time for an exam, even if his whole future depends on it. He causes his mother endless anxiety and drives his teachers to distraction. He has exactly the same effect on the local police.

When a boy from Garvie’s school is found dead of gunshot wounds in a deserted building, the police make little headway on the case, much to Garvie’s irritation. He’s certain they’re not asking the right questions, and the temptation to meddle in the case, as well as irritating the long-suffering DI Raminder Singh in the process, soon becomes irresistible.

The victim, Polish schoolboy, Pyotor Gimpel, known to most of the kids at Marsh Academy as The Gimp, was a loner. Pyotor was somewhere on the Asperger’s scale, carrying his precious violin with him at all times as he kept himself to himself and never interacted with anyone else at the school. Garvie wants to know the whereabouts of the violin case and its precious contents.

Garvie’s friends Smudge and Felix are back, as well as beleaguered copper, DI Singh, who has to contend with more of Garvie’s antics. Singh has already blotted his copybook with his earlier dealings with Garvie, and this case doesn’t look like enhancing his reputation much, either. The police have a suspect in custody, but Garvie is convinced they’re barking up the wrong tree.

Garvie is one of the most original creations in YA crime.fiction. He’s sharp as a tack, and very funny, but there’s also a poignancy to the way he juggles his determination to solve the riddle of Pyotor’s death with his desire not to let his mother down any further than he already has done. Mason’s characters are always well drawn, although there’s a certain haziness on the subject of police procedure. His detectives dress and act more like uniform branch, but that’s an easy thing to gloss over, especially when Singh’s character gets more fleshed out in the course of the investigation. There’s even a hint that Garvie is starting to take an interest in the opposite sex.

Kid Got Shot is clever, complex, original, and very, very absorbing. It’s very much a case of once met, never forgotten, where Garvie Smith is concerned.