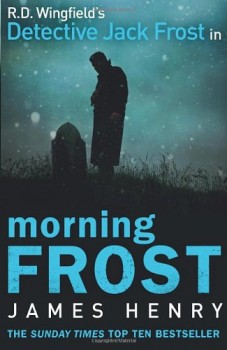 I was hooked by the original Frost books when they first appeared in the late 1980s, but prequels are always something I approach with a degree of trepidation, especially when they’re not in the hands of the original author. As it turned out, my fears were pretty soon laid to rest when DS Jack Frost shambled onto the page and continued to smoke and drink his way around Denton, being as much of a thorn in Superintendent Arthur Mullet’s side as ever he was.

Despite the fact that this is now the third ‘new’ Frost book, only a year has passed in Denton. Frost, now in his mid-30s, has to cope with the reality that his wife, Mary, is dead from cancer and although their marriage hadn’t exactly been rosy, her death still seems to have hit Frost quite hard. He spends nearly all the book wearing a pullover with a reindeer on, sporting heavy stubble and – if possible – smoking, drinking, and irritating everyone around hum even more than usual, even going as far as to head-butt his sister-in-law’s husband at the funeral.

Denton, and nearby Rimmington - where the posh people live and Masonic connections abound - is its usual hotbed of criminal activity. Body parts turn up in a field, local nightclub owner Harry Baskin is shot at his own club along with one of his employees, there’s an armed robbery plus a death that might – or might not – be a hit-and-run. That’s enough for any recently-bereaved copper to contend with. It’s nice to see that nothing changes in that part of the world!

It’s said that original creator R D Wingfield was never enthusiastic about the immensely popular TV series starring David Jason, saying that Jason was never ‘his Frost’, but for anyone who has seen it, there’s no doubt that James Henry’s Frost owes probably as much to that series as it does to the original books. If you’re familiar with Jason in the role, it’s hard not to hear him deliver the lines while you’re reading them, But for all that, the books do stand alone, and Morning Frost is no exception.

All the usual suspects make an appearance in the great big sprawling soap opera that’s 1980s Denton, the only change being that computerisation is about to rear its ugly head, giving Mullet and his cohorts something else to worry about on top of the usual crime wave. As ever, events come thick and fast, and there’s never time to get bored. There were even times when I found myself cheering for Mullet, especially when he was struggling with his conscience over his desire to join the Masons.

If you liked Frost in any of his earlier incarnations, either in books or TV, I’m certain you’ll like the new series. Frost is irreverent and stuck in his ways, but he’s also clever and intuitive, and it’s always great to see him back in action, especially when the odds seem to be stacked against him. Morning Frost packs quite a punch in places and, as ever, the 1980s setting is well-invoked without the cultural references seeming heavy-handed. This series is maturing excellently and no doubt there’s plenty yet to come for Frost.