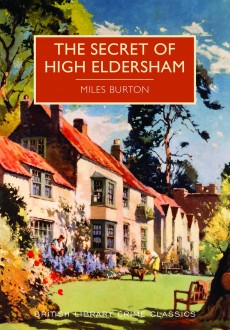 The Secret of High Eldersham

The East Anglian village of High Eldersham is unwelcoming to strangers. Several have suffered catastrophic accidents. But when a new landlord is found stabbed in his own pub, Scotland Yard are called in.

The British Library continues to mine the 1930s Golden Age of Murder to great effect – but now seems determined to develop a mystery of its own! It has released two of the best murder stories by Miles Burton – an author who remained something of a mystery himself for more than 40 years.

Burton was one of a series of pen names used by Cecil John Street, who produced more than 140 novels and was a contemporary of Agatha Christie and Dorothy L Sayers. From an Army family, Burton served in the Artillery in the First War, won an MC and was wounded three times before transferring to military intelligence as a Major.

His career bears more than a resemblance to that of his longest-running detective. Gentleman sleuth Desmond Merron featured in more than 60 of Burton’s stories. An independently wealthy injured hero of the Navy’s Dover patrol, transferred to intelligence because of his range of arcane knowledge, Merrion is a square-jawed, dependable and resourceful example of a uniquely British line of amateur gentleman sleuths from Sherlock Holmes to Lord Peter Wimsey.

But unlike Holmes, whose relationship with the unfortunate Inspector Lestrade was one of, at times, scarcely concealed contempt, he is happy to put his abilities at the disposal of his police friends.

He makes his first appearance in this story of superstition, crime and murder in a remote East Anglian village. But the question is why did the British Library choose to release this after Death In the Tunnel where modern readers are expected to already know of his vast range of knowledge, leaps of brilliant logic and sometimes inspired guesswork.

Scotland Yard are called in after the murder of the recently arrived landlord of the village’s only pub. Detective Inspector Young soon senses an atmosphere of superstition and fear – and a record of strangers finding real problems in the closed and suspicious community.
Scarcely able to believe what he finds, Young asks his friend Merrion for help.

This intriguing mystery story was first published in 1930 and some of the subjects it deals with are quite remarkable given the normal run of Golden Age mysteries. The story moves along at pace, with multiple threads of inquiry, mystery elements, and great characters. A background featuring a land of shallow waters, sandbars, fog and marshes, suspicious insular people and strange goings-on frames the tale.

One of Burton/Street’s strengths is that even at an 80-year remove, the minor characters feel very real for the times and there is no patronising or looking down on them whatever their station in life.

Even the love story between Merrion and the daughter of a local magistrate, almost compulsory in the genre, is well handled and does not impinge on the flow of the story.

It’s really great stuff, and a real classic, with more than a touch of the Dennis Wheatley for those old enough to remember the Satanic tales of that great author.