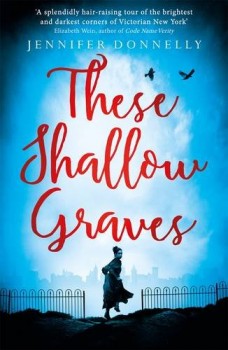 Miss Josephine Montfort has been destined from birth to lead a respectable life and make a good marriage. But her father’s untimely death threatens to rock Jo’s world to its foundations.

On the face of it, Miss Josephine Montfort has everything that a girl could desire. She comes from one of the wealthiest and most respectable families in New York. She is a student at Miss Sparkwell’s School for Young Ladies, an expensive finishing school in Connecticut. It is widely accepted by her family and friends that she will soon be engaged to Mr Abraham Aldrich, the handsome son of an equally wealthy and well-established family, cementing Jo’s future as a dutiful wife and mother. But Jo wants more than that out of life. She wants to be a writer, not just writing about cats in the school magazine, but an investigative reporter like her heroine Nellie Bly, famous for her expose of the shocking conditions in a mental asylum.

When Bram Aldrich and his sister unexpectedly visit Jo at school, they bring with them news that collapses Jo’s secure world. Her father has died in a tragic accident at home in New York, shooting himself whilst cleaning a loaded gun. Jo finds it hard to believe that her father could have been so careless and starts to dig a little deeper into the circumstances of his death. A chance encounter with young reporter Eddie Gallagher adds to her suspicions and Jo has to come to terms with the knowledge that her father might have committed suicide, with her family engaging in a cover-up to protect the family’s reputation. But suicide is not the end of the story, as Jo soon discovers. The truth appears to be even more shocking.

These Shallow Graves takes a penetrating look at all spectrums of New York society in 1890. In the homes of the very rich, girls like Jo lead sheltered, privileged lives, with their whole futures mapped out by well-meaning families. At the other end of the scale are girls like ‘Fairy’ Fay, bought from an orphanage by a Fagin-like character known as the Tailor and brought up to be a pickpocket and a thief. Fay’s destiny isn’t a respectable husband; instead she’ll soon be sold into one of the slum district’s notorious ‘disorderly houses’.

As Jo’s investigation into her father’s death continues, she becomes closer to Eddie Gallagher and starts to question the future that has been mapped out for her for so long. Jennifer Donnelly’s book is as much a lovely story as it is a crime thriller and I found myself hopelessly caught up in Jo Montfort’s world as she digs deeper into the world of the shipping trade that made so much money for her family. Jo is tough, resourceful and brave, not shying away from her search for truth, even when it threatens the entire foundations of her life and her future.

Donnelly’s characters positively jump to life on the page, from streetwise Fay to mortuary assistant Oscar Rubin who helps Jo with her enquiries, bringing his medical knowledge and dark sense of humour to the investigation, as well as a hearty appetite that even being up to his elbows in dead bodies can’t quell.

Jo Montfort soon had me under her spell and I romped through the book as quickly as I could but, at 500 pages, there’s plenty to keep you entertained and in this case, length is an advantage, as Donnelly has a good story to tell, and the pace never flags. Hot Key Books, the young adult imprint of Bonnier Publishing, has put out a string of excellent stories, and These Shallow Graves is no exception. It’s good to see a publisher who’s willing to give a book its head, allowing it and the characters time to develop. The story is intricately and perfectly plotted, with no wasted detail. The clues are all there, but it takes time to put them together, time that is well spent getting to know Jo and her friends.