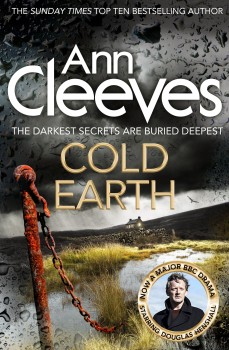 Detective Inspector Jimmy Perez of the Shetland police is attending the funeral of an old friend when a sudden land slip smashes through a croft in its path.

Detective Inspector Jimmy Perez of the Shetland police is attending the funeral of an old friend when there is a sudden land slip close to the grave site. It virtually demolishes a house in its path which is assumed at first to be unoccupied. When the slide has stopped and Perez climbs down the hill, he finds a woman’s body in the shattered house.

It is not certain that she was living there and identification of the body proves difficult. It becomes crucial, however, when the post-mortem reveals that she had been strangled before the land slip occurred. Perez feels an unaccountable sympathy for the murdered woman and is determined to find whoever was responsible. To this end he persuades Detective Chief Inspector Willow Reeves of the Serious Crimes Squad to come over to Shetland to take charge of the investigation. His action is partly influenced by the so far unstated attraction he feels for Willow.

These two, together with their junior colleague Sandy Wilson, begin to make progress in the case. The first task they face is to discover the identity of the dead woman – something that is accomplished one step at a time and strictly according to police procedures. The progress is slow but never uninteresting, partly because of the flavour and atmosphere of Shetland that the author manages to create.

When the reason for the murder is finally established it is surprising in the context of Shetland, but eminently believable when viewed in the context of human nature.  Whether it would give rise to the scandal the perpetrator fears and whether the avoidance of such a scandal would be a legitimate motive for violence are at least debatable. These, however, are merely quibbles and there is no doubt that interest is maintained up to the very last page.

The two families that feature strongly in the novel – the Hays and the Rogersons - appear to the outsider to be almost boringly normal but that is far from the case. Much of what we learn of them is not strictly relevant but the author is not afraid to take time to show them dealing with their own problems and trying to keep their own secrets. The main protagonists – Perez, Willow and Sandy – are all well drawn. The personal problems that Perez in particular faces - the loss of a wife and the responsibility of bringing up her daughter as she would have wished – are very sympathetically portrayed.