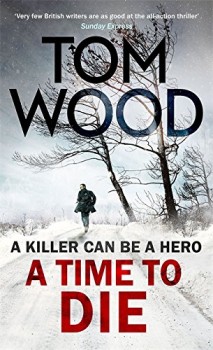 A Time To Die

A professional killer takes on a difficult target, but his task is doubly complicated when he discovers that someone has offered a contract on him.

This is the sixth outing for the paid assassin known as Victor. He has survived so far in the murky world he inhabits by a combination of fearsome skill, unarmed or with weapons, and mental focus totally dedicated to the recognition of menace. The discipline required to maintain this state of readiness leaves little room for moral considerations, but when he can, Victor shows vestiges of a conscience.

As the book starts he is on a train in Russia, fulfilling a contract on behalf of the British secret service, specifically MI6. Thanks to his constant preoccupation with possible threats, he recognises another of his trade on the train. Engagement ends in stalemate, but Victor is warned: a contract is out on him and an attack may come at any time.

Back in London, his handler offers him a new job, targeting Milan Rados, a war criminal who escaped justice and is now a mob boss in Belgrade, protected by others who share his political views. Victor’s facility with languages allows him to establish himself in the city, and through a chain of circumstances to meet his quarry.

Rados finds Victor interesting, and offers him work, but Victor is well aware he is not trusted. Rados has a sideline moving girls from Eastern Europe for prostitution, and Eva, a recently-arrived Armenian, is prepared to gather information for Victor in the hope he can engineer her release. But if Rados is suspicious, his number two, Zoca, is actively hostile. Killing Rados and securing escape for himself and Eva will be a real challenge.

Making a hit-man your protagonist poses some questions, but Tom Wood answers in two ways. Firstly, in the focus placed on Victor’s skills and his analytical approach to every new situation, which is full of interest. Ford’s ability to make Victor credible is impressive, an illusion which would be immediately undermined by even one false step in page after page of detailed depiction of Victor’s activities, with plenty of technical detail. The action scenes are compelling, but the tension is maintained throughout, with very few breaks.

Secondly, Victor shows himself by his actions and his thoughts (we are constantly privy to Victor’s thinking) to be at worst amoral. His victims, where they are not other assassins, are people that by and large the world would do better without. He stands by his agreements, so for example he does his best to fulfil an undertaking he made with Eva even when this puts him at some unnecessary risk. He has a sense of honour, even if this does not correspond with what is normally meant by the word. If you accept the need for assassins, Victor is perhaps one of the least objectionable.