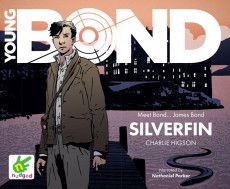 Something sinister is stirring in the deep waters of Loch Silverfin. Young James Bond investigates the disappearance of a friend’s young cousin and soon ends up in a whole heap of trouble.

1933. James Bond is 13 and has just started school at Eton College. He hates the starched uniform, the strange names and stranger customs, and soon falls prey to bullies like George Hellebore, whose father Randolph is a rich arms dealer who obtained his wealth from selling weapons after the Great War.

James’ father, Andrew, also worked in the arms trade. He and James’ mother were killed in a climbing accident, leaving James in the care of his aunt Charmian. James and George Hellebore become fierce rivals, with no love lost between the two boys, especially when George’s attempt to cheat in a race to impress his father goes wrong, and he loses out to James and another boy.

During the school holidays, James goes to Scotland to spend time with his Aunt Charmian and Uncle Max, who is dying of cancer. On the way, James meets ‘Red’ Kelly, a London boy from a much less privileged background who’s bunking aboard the train without a ticket so that he can get to Scotland to help in the search for Alfie, his younger cousin who has disappeared without trace. At this point, the relevance of the prologue where an unnamed boy meets an unknown fate on an illicit trip to the deeply sinister Loch Silverfin, becomes clear.

I’m not in general a fan of prologues, as all too often their relevance is at best obscure and at worst downright annoying, but here Charlie Higson uses his opening scenes to great effect, ramping up the tension with style, before condemning his young trespasser to what seems like a horrible death. But it’s never wise to take anything at face value in the dangerous world that James Bond finds himself facing.

There are plenty of clever homages to the original books and, with the aid of Ian Fleming Publications who administer Fleming’s literary works, the original details are fleshed out a little more, with young Bond being given a birthdate of 1920, whereas Fleming himself was never explicit in this regard. At the end of the book, James inherits his uncle’s 1.5 litre Bamford & Martin Sidevalve Short Chassis Tourer, and in later life Bond will become associated with DB5 model from Aston Martin, founded by Bamford and Martin. Fans of the original books will no doubt pick up on plenty of subtle foreshadowing to Bond’s adult adventures. There is even the obligatory Bond girl, in this case the aptly named Wilder Lawless, who rides a horse called Martini. Not all the allusions are very subtle!

Nathaniel Parker’s narration brings a disparate group of characters to pitch-perfect life, from Aunt Charmian’s melodious Scottish tones to the arrogant American, Randolph Hellebore, who fits seamlessly into the villainous role assigned to him, even if he does stroke eels rather than a white cat. Parker’s equally at home with the younger voices as well, presenting a cool, daring young James Bond, who keeps his head under pressure, even during some claustrophobic underwater scenes that will almost certainly leave you gasping for breath. Some of the descriptions are not for the faint-hearted, but as teen adventures go, it’s hard to beat young Bond for a rollicking ride.