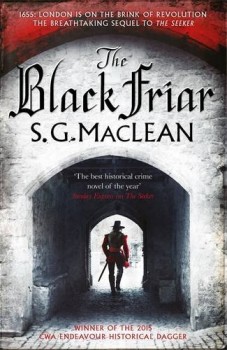 Damian Seeker, captain of Cromwell’s guard, faces sedition, armed rebellion, a Royalist spy in his own ranks and the threat of a Stuart invasion.

The courage that Highland lassie SG MacLean showed in abandoning her fiery Scottish hero Alexander Seaton – soldier, spy, assassin and plotter in the cause of the deposed Stuart kings – was rewarded when his killer Damien Seeker won her last year’s CWA Historical Dagger with his spectacular debut.

This tangled and gripping tale of crime and sedition in a city on the verge of rebellion is set in 1655, just two months after the first story. Seeker is captain of a handpicked guard unit of the New Model Army, reporting directly to John Thurloe, Cromwell’s Secretary to the Council of State and spymaster. Seeker is a man with no past. No-one even knows his real name or background. He is a big, tough Yorkshireman, utterly loyal to Cromwell and ruthless in pursuit of enemies of the Commonwealth.

And how the Lord Protector needs him. The army may be still largely be loyal, but opposition from Parliament, then as now convinced of its own infallibility, and former supporters on Protestantism’s extreme fringe, is growing with wild preachers and pamphleteers promoting ever more violent ideas for a return of the Kingdom of Christ the Peacemaker on earth.

England’s enemies in Europe wait their chance and the exiled Stuarts, travelling from Continental court to court, constantly plot a return, aided by the Sealed Knot, a royalist underground in England, Wales and Scotland.

In a London full of get-rich-quick merchants, dubious self-advancing politicians, spies and soldiers, exiles and assassins, the newly fashionable coffee houses are places men meet to gossip – and plot. The talk is of a ‘miracle’ body of a Dominican friar, found perfectly preserved, walled up in the ruins of the Order’s former monastery at Black Friars.

Thurloe and Seeker know better. The clothes may be early Tudor, but the corpse is one of Thurloe’s top agents – a man charged with uncovering the activities of the Fifth Monarchists, an extreme sect dedicated to Cromwell’s overthrow. And it appears, he was walled up while still alive.

While rumour and speculation abounds, Seeker must discover why the man met this hideous end, what his connection was to a group of bright and beautiful orphaned children who have started to disappear from around the city, and how, if at all, both are connected to another royalist plot to seize back power.

The Commonwealth is a strange period, largely ignored by fiction writers, sandwiched as it was between the Civil War and execution of Charles I and the Restoration. But with its reminders of past pleasures, such as the banned theatres, and Cromwell’s own struggles to impose his will on a divided country, it offers rich pickings for a brave and determined author.

MacLean is just that. Her stories are not quick to judge between royalists and puritans, with crimes committed by both sides – and sometimes taking second place to purely evil criminals above both politics and religion. She effortlessly achieves the delicate balance of immersing the readers in time and place without ever swamping them in research, while the central mystery is satisfying and plausible. The disparate threads of her plot are skilfully woven and her characterisation both subtle and convincing, whether featuring historical figures such as the diarist, libertine and self-promoting Samuel Pepys and the poet Andrew Marvell, or fictional creations, both human and animal!

A host of other notable characters on both sides of the political divide provide a rich background and the relationships between the spies and assassins make a particularly interesting subplot. But above them all towers the Seeker – a prototype for the Man With No Name who made Clint Eastwood an international star – a hard man with a softer core who makes these books so memorable

He really comes into his own here, sinister yet strangely attractive as he silences conversation by merely walking into an inn, avoided and feared by ordinary people as he rides past on his great horse. But occasionally the mask slips and readers are treated to a glimpse of the man, husband and father he might have been had his hidden past been different.

This convoluted, fascinating and sometimes brutal story can easily be read as a standalone, but I would suggest going back to the beginning with The Seeker to get the full impact and flavour of this phenomenon who is likely to dominate the genre for some time to come!