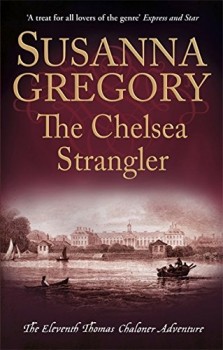 Thomas Chaloner investigates murder, plots and robbery while the plague rages in London.

In the sweltering summer of 1665 London is in turmoil. Plague is raging in the crowded city. The first flush of joy at the Restoration is over and public disquiet at the libertine habits of Charles II and his court has been exacerbated by their flight to the less dangerous airs of Hampton Court. Officials left behind to continue the work of government, dispossessed Cavaliers whose support for his executed father is ignored, extreme Protestant sects – banned even by Cromwell – all plot endlessly against a king more interested is his gambling and mistresses.

Thomas Chaloner, former Parliamentary soldier and spy, now private intelligencer to the embattled Lord Chancellor, the Earl of Clarendon, has returned from the great naval battle of Lowestoft, which for the present has made England safe from Dutch invasion, to discover that his second wife has died of plague. All she has left is a final letter, with what appears to be a cryptic message, but could just as easily be the final ramblings of a demented woman.

He has also returned to a city where the only people on half-deserted streets which echo to the sound of church bells and those who remain clutch quack potions to ward off the disease and dart nervously past plague-marked buildings, watchful for the thieves who risk their lives to plunder what is left.

Meanwhile in Chelsea, a rural backwater by the Thames, those of the court unable to find a place with the king, have set up home in some of its fine mansions. The government has commandeered a once notorious theological college to house Dutch prisoners of war amid constant rumours they are on the brink of escaping.

Then a female inmate of a private sanatorium known as Gorges is strangled and Chaloner is sent to investigate. The few facts he is able to discover are contradictory and elusive.

He soon comes to realise that the sanatorium has closer links to the prison than mere proximity and must pick his way through a series of mysteries and plots involving some of the most greedy, self-interested, unpleasant and dangerous men he has ever dealt with. At the same time he must find a lead to a vicious killer who strikes again and again – and has no qualms about adding Chaloner himself to his list of victims.

This is Susanna Gregory at her best. The Chelsea Strangler is cleverly written, beautifully backgrounded, as twisted as the Gordian Knot, all building to an explosive and surprising denouement.