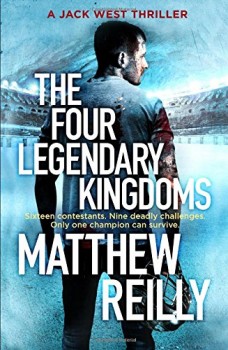 Jack West Jnr must fight for his life, and the lives of his friends, in a series of hellish gladiatorial combats.

If you’re already a fan of Matthew Reilly’s delightfully improbable thrillers, you’ll not need to be told to check your disbelief in at the door before you start reading. If you’re new to his books, then do just that, hang onto your hat and get ready to enjoy the ride.

For those who’ve not met Jack West Jnr before, according to ancient prophecies, he’s the fifth greatest warrior in history, an all-round tough guy with a soft spot for some cute but equally heroic pets: a feisty poodle called Roxy, Ash, a guide dog who failed her exams for not being assertive enough, and a peregrine falcon called Horus. And the fact that I kept reading to the end is probably a clue that the book equivalent of www.doesthedogdie.com wasn’t needed on this occasion. Hey, who cares about spoilers? Pets matter!

The Four Legendary Kingdoms jumps straight into the action as Jack wakes up in a cell and is promptly attacked by a warrior wearing a bull-mask, looking like the legendary Minotaur. It’s a case of fight or dies. Naturally, Jack chooses to fight, and that sets the scene for yet another of Reilly’s fast-paced, but entirely bonkers adventures.

Jack has been kidnapped, along with his dogs, his adopted daughter Lily, her friend Alby, and Jack’s pilot friend, nicknamed Sky Monster. With his pets and his friends held hostage, Jack is forced to fight in a series of increasingly difficult gladiatorial conflicts designed to prove that there is still intelligent life on earth. Follow that? Nope, neither did I, but hell, the action is good, so who cares? You do? Oops, then probably better to back off now if you can’t manage to suspend your disbelief for this sort of thing.

If you can get past the above premise, then just buckle in, and let yourself have some fun. The action is described with positively cinematic verve and the help of some handy diagrams so you can navigate the same challenges that are thrown at our hero. Reilly is a master of the art of Just One More Damned Thing After Another, and the phrase ‘out of the frying and into the fire’ could have been coined for this book.

Reilly has an enviable knack of capturing his characters in a few well-chosen thumbnail sketches, and this applies to old friends as well as new. The bad guys are, as expected, larger than life and very nasty indeed. For conspiracy fans, the driving force behind the kidnappings are the shadowy kings of the titular Four Legendary Kingdom, including Hades, the King of the Underworld, who just happens to be an urbane French businessman, in control of a vast army of Neanderthal slaves dressed as minotaurs.

Be fair, I did say it was all a bit bonkers, but it’s still damn good fun, and for long-time Reilly fans, there’s something of a treat in store, but on that subject my lips are very firmly sealed.