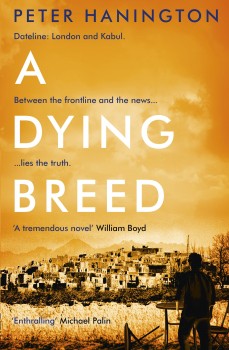 An explosion in Kabul is followed by expressions of regret about the death of an American ally at the hands of the Taliban, but journalist William Carver uncovers facts suggesting a different story.

This book is written by a stalwart of BBC Radio 4’s Today programme and the central characters include three fictional journalists working for the show: Carver, a veteran of many war zones, Patrick, a recent recruit, and Rob Mariscal, a senior producer. Carver and his local assistant Karim are soon on the spot when a Kabul tailor’s shop is bombed, and before long pick up hints that the atrocity has unusual features.

Patrick and Mariscal also end up in Kabul, not so much in the service of journalism but as a result of pressure by shadowy characters who want to control the release of information, and have the resources to ensure they get their way. These are locally represented by a brutal character by the name of Roydon whose status is unclear, and their influence takes in the military and even extends to the Ambassador, Lever.

Things take a serious turn when Patrick and Karim are kidnapped by ‘The General’, a warlord who also wants to find the person responsible for the bombing. Patrick and Karim know only parts of the story, and only Carver can put it all together, so the General offers an exchange. Roydon and Carver head for the rendezvous, but Roydon’s instructions make it clear that the journalists will be unfortunate casualties of the encounter.

The author’s experience with radio journalism enables him to give a picture of the life both in the field and back in the studio. If he is to be believed, the studio is not much more relaxing than a war zone: pressure to come up with better stories, competition between producers with little quarter given for inexperience or weakness, jealousy and spite throughout. In Kabul it is pretty much the same, aggravated by a paucity of home comforts and a fairly good chance of bodily injury.

Few of the characters emerge from this with great likeability, but one does come to appreciate that reportage in places like Kabul takes a determination to get the story which overrides usual impulses for ease and safety. Overindulgence in booze and cigarettes is understandable in the circumstances, although it is difficult to imagine that anyone could sustain Carver’s punishing regime for very long.

As one congenitally resistant to conspiracy theories I find that aspect the most difficult, but it is not overdone. The lead actors are all represented with a degree of moral ambivalence that gives them substance as well as making them interesting to read about, and helps sustain uncertainty about the outcome until the final pages. The pacing of the story is well judged and increases to an exciting finale. This is certainly an impressive first novel, and an interesting counterpoint to the sometimes anodyne BBC reports from ‘our foreign correspondent’.