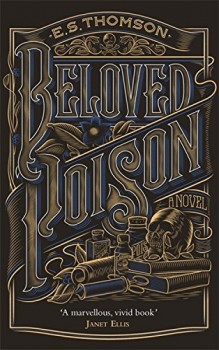 St Saviour’s Infirmary in London awaits demolition. Apothecary Jem Flockhart uncovers six tiny coffins and her search for their meaning reveals a long forgotten past and sparks a series of murders.

ES Thomson’s debut can only be described as unique. Opening with a cliché, it blossoms into a magnificent Gothic thriller, dark, atmospheric and creepy, reeking of Victorian grime and macabre medical practice.

A word of caution, though. The author is an academic specialising in the history of medicine, and some detailed scenes, such as amputations, are gorily accurate in the extreme and certainly not for the sensitive! That said, it’s a great read, fluently written and with an overarching grim atmosphere. The medical history, particularly that of herbs and poisons, only adds to the sweeping power of the story.

Jem Flockhart is an apothecary at the crumbling and soon to be demolished centuries-old St Saviour’s Infirmary. She poses as a man – a deception made easier by her build and a disfiguring facial birthmark – to keep alive a family tradition.

In St Saviour’s foul wards and cramped corridors its doctors bicker and fight, ambition, jealousy and hatred hidden by a veneer of professional courtesy. Jem discovers six tiny coffins hidden in the infirmary’s disused chapel, each containing mouldering rags and dried flowers and her search for their meaning sparks a trail of murders and leads from the bloody world of the dissecting table to the squalor of Newgate and the gallows.

As a young architect prepares to empty the hospital’s graveyard to make way for a new railway and the dead are unearthed, the living are forced to make near impossible choices.

Thomson exploits the small, claustrophobic world of the hospital with its limited cast of characters to the full. But it is her narrator, Jem, a thoughtful, engaging protagonist, who binds all together as she struggles to solve the mystery of the coffins – and keep ahead of the killer.

The role she plays separates her from those who surround her, but provides its own freedom. Secretly in love with the beautiful daughter of one of the surgeons, she is convinced her feelings cannot be returned, but with the architect, Will, she discovers real friendship for the first time.

Thomson handles these gender issues with awareness and consideration and adds some keen observation of the limits on women’s roles in Victorian times and how they impact on individuals. Her story also highlights the grim social realities – the insanitary and brutal practices of Victorian medicine and child poverty. The squalor of London’s slums is vividly detailed, the stench of the surroundings so palpable, you can almost feel the horror.

If you’ve got a strong enough stomach to stand it, this fascinating, clever, superbly researched venture into the darkest of Gothic mysteries will keep you reading to the very end.