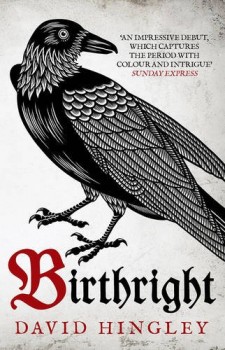 Widowed Mercia Blakewood must gamble everything she loves to save her family and inheritance. Her quest takes her to the New World at a time of historic change.

David Hingley’s debut has almost everything. A believable plot set in one of the most turbulent times in British history, a sparky and determined heroine willing to gamble everything to save family and future, and a solid historical base. But somehow the whole is not the sum of its parts.

For a start, it’s all far too modern. Mercia Blakewood is a veritable Lara Croft in crinolines. Motherly love is powerful, but the idea of a well brought-up mid-17th century woman casting off her skirts to climb a mast in the middle of the Atlantic to rescue her son while the ships’ crew watches, stretches the imagination. So too do several other of her more extreme actions. And the idea of her following the King of England into the cabin of his private barge for a chance to put her case, then sympathising with him about his demanding mistress, is frankly ridiculous.

Then there’s the simply impossible, such as the villain of the piece being able to reload a powder and ball pistol in the time it takes you to read this sentence! All that said, this is a vividly rendered story of love and betrayal set between the shifting politics of Restoration England and the rapidly expanding New World.

Four years after the Restoration, Mercia has lost her father, executed for alleged treason. His estates have gone to her treacherous uncle, and her late husband’s parents threaten to take her son. But in his final speech from the block, her father leaves her a cryptic message which gives her a  chance to fight back. With her old friend, now himself a widower and her would-be lover Nathan Keyte and unlikely new ally Nicholas Wildmoor, Mercia sets out to recover stolen paintings precious to Charles II to enlist his support for her case.

From London’s gilded courts, filthy slums and backstreets to the wild forests of Manhattan she and her allies face intrigue, lust and murder as she fights for her future and her life. All this is set against a background of undeclared war and the seizure of the Dutch township of New Amsterdam as England establishes itself as the major power on the rich new continent of America.

Hingley impressively captures the Restoration court, with its former Parliamentary and Royalist rivals intriguing to influence the king – and enrich themselves – as England struggles to come to terms with the aftermath of the bloody Civil War. His baddies are positively evil, his goodies represent the country at its best, and there are plenty of other characters, each with their own agendas, who could provide dead ends and plot twists.

But Mercia Blakewood dominates throughout as she fights to retain her independence against increasing odds. The mystery of the missing pictures becomes almost secondary despite her grim determination to solve it, to the protection of her son and both their futures. Even the possibility of finding love again must take second place to this imperative. Hingley has produced an intelligent and determined heroine, who, with a little more refinement, could become the anchor to a great series of adventures.