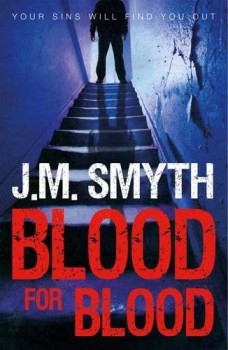 Criminal brain Red Dock steals a policeman’s daughter to begin a carefully planned, brutal and barbaric revenge on the family who put him and his twin brother into care.

Belfast-born JM Smyth’s second novel must be leading the field for the dubious honour of sickest book of the year! Make no mistake. It’s not just sick, it’s merciless and harsh – and absolutely brilliant,

His first novel Quinn was shortlisted for the CWA New Blood Dagger and this, however horrifying, is even better. But if the varying degrees of psychological disturbance which make the all-too-vivid portrayals of murder both so ingenious and so far beyond moral limits, it is the driving underlying message behind this story which is the real sin.

From 1930 to the 1990s, more than 30,000 Irish children, petty thieves, truants or from dysfunctional families – a category that often included unmarried mothers – were sent to an austere church-run network of industrial schools, reformatories, orphanages and hostels. Systematic abuse, physical brutality, molestation and rape were common in boys’ facilities, mainly run by the Christian Brothers order. Girls, supervised by nuns, chiefly the Sisters of Mercy, suffered less sexual abuse, but frequent assaults and humiliation.

Robert (Red) Dock and his twin brother, Sean, were two of Ireland’s unwanted babies. Red was strong enough to survive. His brother died an unnecessary, unrecorded and uninvestigated death. Red is consumed by the idea of revenge on the family he believes abandoned them to the Brothers He is now a cold, calculating and respected criminal brain, and plans to make them pay for the loss of his twin.

His 20-year plan starts with the kidnap of the baby daughter of a policeman with whom he has clashed. To subject her to the same cruelty he suffered, he perverts the nuns’ registration system to ‘disappear’ her inside the same care system. This is the beginning of an intricate, carefully planned and diabolical scheme, with many interwoven threads, aimed at destroying those Red considers responsible for Sean’s death.

As the plans progress, his path crosses that of a crazed serial killer – who uses his female victims to create a calendar of death which he plans to exhibit at art galleries – and who turns out to have been at the same Brothers’ school.

Red blackmails him into becoming his executioner by proxy and the pair embark on one of the most ingenious and shocking killing sprees ever to appear in a book. This eerily fascinating novel, which makes Tarantino look like Enid Blyton, has a unique storyline and some strong and interesting characters. Narrated by the three main protagonists, Red, the crazed artist and the kidnapped girl, the reader is kept in the dark over its full extent until the very last word.

Red’s scheme is brilliantly clever, his thirst for revenge quite obsessional and nauseating and his total lack of feeling is beyond callous. Despite all this, he remains strangely charming and his dark humour offers splashes of relief to this sordid tale.

It may take you a little while to get to grips with the very Irish and totally in keeping sentence structure and style, but you should quickly pick up the tone. The closing chapters are terrific, building at breakneck pace through some ghastly and obscure murders to a most unexpected ending. If you are after a story which is more than a little different – clever, intricate,  uncomfortable and studded with dark wit – and your stomach and imagination are strong enough to cope with it, this is a truly brilliant piece of work.