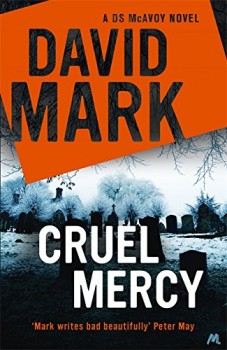 DS Aector McAvoy is visiting New York to trace a traveller, his wife’s brother Valentine Teague. Two members of a rival clan, the Heldens, have been shot and unless Valentine is cleared a long-standing feud may be reawakened.

This is the sixth outing for Aector (Hector) McAvoy, of the Humberside Serious and Organised Crime Unit, and normally found working in Hull or thereabouts. Aector is a Scotsman, built like a fridge, a decent man if a little naive, and devoted to his traveller wife Roisin and their children.

Unusually, he is in New York, a long way out of his comfort zone, and freely admits to feeling out of his depth, both to his boss Trish Pharaoh back in UK and to detective Ronald Alto, his contact in NYPD. His visit follows that of three traveller Irishmen, all enthusiastic boxers. Two were involved in an out-of-town incident in which one was killed and the other shot in the head but by some miracle still alive. The third, Valentine, is his wife’s brother, with whom contact has been lost.

The chain of events is unclear, but in Ireland suspicions in the Helden family are that Valentine may be responsible. Aector needs to find him, and hopefully to establish that he was an innocent party, before the Heldens are tempted to take revenge on his wife’s family. He faces great difficulties, however. The shootings are entangled in a major operation against the Italian and Russian mobsters; the FBI want McAvoy back in UK before he complicates matters.

Unlike Aector, the reader is made aware at least two parties relevant to the incident. A depiction of the shooting from the perspective of an Italian, Claudio, shows that the mafia are involved, although why they should want to kill two Irishmen is obscure. Even more dark is the opening chapter: a crazed religious fanatic responsible for a string of killings under the most horrible of circumstances.

Despite the obstacles McAvoy does make progress. His confusion does not prevent him asking questions, and although he feels ineffective, light begins to emerge. Pharaoh in UK is an active resource, and he does a favour for Alto which compels Alto to show a bit more of what the local crime agencies know. The full picture is a complex one and does not fully emerge until the final pages.

The author is a former Yorkshire Post crime reporter, and earlier books in the series have made full use of his experience to provide a fairly gritty view of crime and policing in that part of the world. With presumably less direct experience of the way things work across the pond, Mark nevertheless conveys what feels like a realistic picture of how things work in a very different jurisdiction. As with previous books, there are plenty of grim events to balance the warmth which surrounds the leading character.