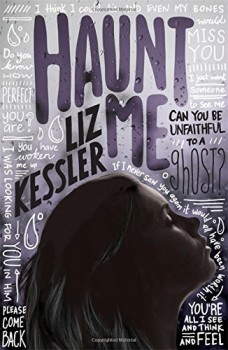 When Erin and her family move into a new house, she’s not expecting to find someone already living in her bedroom, especially not the ghost of its former occupant.

When Joe wakes up on the floor of his bedroom, he can’t understand where his bed or the rest of the furniture has gone. At first he thinks he’s the victim an elaborate prank by his brother Olly, but when he looks out of the window, he sees a removal van, packed and ready to leave.

No matter how hard he tries, Joe can’t open the window, nor can he makes his family hear him, but then Olly walks into the bedroom, and things go from bad to worse. Olly can’t even see him. The answer is a chilling one: Joe is a ghost, and his family are about to leave him behind.

Erin and her family have moved into a new house in a new neighbourhood. Erin falls in love with her new bedroom as soon as she sees it, but what she doesn’t know is that she’s sharing it with Joe. Her gradual realisation that she’s not alone is deftly handled, and Erin’s matter of fact acceptance of Joe’s presence is one of the book’s great strengths.

Haunt Me alternates between the points of view of the two main characters, told throughout in the first person, providing both pace and an ever-shifting viewpoint on a romance that never strains the bounds of possibility despite the fact that one of the protagonists is dead. Joe and Erin’s growing closeness is handled with a light touch that nevertheless runs deep. But the course of love certainly doesn’t run smoothly, especially not when you add a medium who's determined to help Joe move on, and also Joe’s older brother, Olly, to the mix.

I'm a sucker for ghost stories, and adored Meg Cabot’s Mediator series, which also featured a dead guy in a bedroom, so finding another book with a similar premise but with a very different feel to it was a delight. Both of the young narrators are likeable, funny and memorable. There are no easy, or trite answers to the complicated love triangle Liz Kessler sets up here, and I found I was constantly bracing myself for disaster as I became even more hopelessly over-invested in Erin’s relationship with Joe. Haunt Me is complex, clever and very, very satisfying.