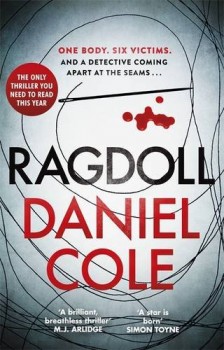 Detective Sergeant Fawkes is called to a horrific crime scene where there is only one body, but clearly six victims.

Four years ago, Detective Sergeant Fawkes, known to the entire world as Wolf, disgraced himself by attacking and nearly killing a criminal in Court One at the Old Bailey. Recently reinstated, he is called to assist his former partner, Baxter, when a body is discovered in the flats opposite his home. But this is no ordinary killing. Nor indeed is it an ordinary victim. Within hours the press has dubbed the body a ragdoll, thanks to it being created from six dismembered parts.

The horrific body is just the beginning. The Ragdoll killer ups his game, sending the media a list of six more of his victims. But these are not people already dead; they are future victims. And now the media knows when they are going to die.

Even in protective custody, the killer can reach his intended victims. Catastrophe follows disaster, and the body count grows. The investigation devolves into a nightmare circus with the whole world watching the big tent. But will Wolf finally crack the ring-master’s whip, or will he go down as an out-of-control clown?

I knew I had a black diamond in my hands within minutes of beginning my journey with Wolf. This book is one of those rare finds where clearly the author has a sparkling combination of sharp observational skills and a wicked sense of humour.

Cole recreates life so effectively that he elicits frequent laughter, even during the most macabre of moments – not with banal James Bond-esque quips, but with believable introspections and brilliant one-liners. It is a clever way of tickling the reader’s imagination, and a refreshingly discreet means of adding detail to each of the characters. Backstory was dealt with equally professionally; sprinkled into the here-and-now with care and dexterity. At no time is the reader bogged down with information about Wolf’s past. This gives a fast-paced read which marries well with the short time-frame of the story.

I could nit-pick and say some of the characters were at risk of being obvious and corny; a disillusioned cop, another one with a drink problem, a lupine journalist, to mention but a few. However, Cole portrays Wolf, Baxter and Wolf’s ex-wife, Andrea, as sufficiently uniquely flawed and human that it was easy to forgive and forget their stereotyped casings. And I was pleasantly surprised by the same amount of attention he gave the lesser characters, including the growing pile of victims.

The story itself will satiate those hungry for intrigue and twists, while the subplots ensure the reader has more than just a who-the-hell-dunnit. Conflict, at all levels, oozes from the first page until the last; there is never a dull moment. The bleak, erratic relationship Wolf has with his ex-wife, and the are-you-completely-blind relationship he has with Baxter will touch the right spot for male and female readers alike.