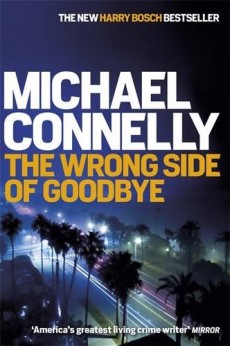 The Wrong Side of Goodbye

A reclusive billionaire hires Harry Bosch to find a missing woman. But there are plenty of people who don’t want her to be found.

Harry Bosch has settled his court action against his former employers, the Los Angeles Police department, but along the way he’s earned the enmity of a lot of his former colleagues. His work as a licensed private investigator hasn’t won him any friends, either. But Harry is quite happy taking on some private clients as well as working as a volunteer in the hard-pressed police department in the nearby town of San Fernando, which occasionally doubles as San Francisco when Harry wants to add a bit more clout to the SFPD initials.

Budget cuts have left the department reliant on unpaid reserve officers like Harry and with his record of homicide convictions, they’re happy to have him despite his somewhat colourful past. When Harry is called in by one of his former bosses who now works in the high-end security market, he’s initially suspicious, but agrees to meet the reclusive billionaire Whitney Vance, who made his fortune in the aviation industry. Harry is handed a very large cheque with no strings attached other than an initial meeting with Vance. Against his better judgment, Harry agrees to meet the man, and once he’s done that, he’s even more intrigued.

Vance wants Harry to find a young Mexican woman he had a brief relationship with at the age of 18. He’s coming to the end of his life and he wants to know if he fathered a child with the girl, Vibiana Duarte. Harry agrees to make some investigations, but is warned by Vance that with so much money at stake, the investigation might be a poisoned chalice, both for Harry and for any heirs that Vance might have.

I came late to the long-running Harry Bosch series, but I’m totally hooked now. Harry’s investigative skills are what has stood him in such good stead in his careers and his creator has a way of bringing the procedures Harry follows in pursuit of his quarry vividly to life without ever slowing the story down. Entwined with the hunt for the missing woman and any possible heirs is the police case Harry is working: the hunt for the serial rapist known as the Screen Cutter who has been targeting women in the San Fernando area for years. The two stories mesh well together and neither detracts or distracts from the other, which is a hard trick to pull off.

One of Connelly’s strengths lies is his ability to bring his minor characters to life as well as his major ones, including his police colleagues and even the people who play the most minor roles in his cases. Harry’s half-brother, lawyer Mickey Haller makes a welcome appearance, as does Harry’s daughter, now at university. But over all this lies the shadow of Vibiana’s story and in Connelly’s hands, the fate of the almost unknown woman comes to be central to the story.

The Wrong Side of Goodbye is a testament to both Harry’s skills as an investigator, and the flashes of intuition that suddenly jump off the page. All the clues are there. It just takes Harry to put them together. The two storylines gather pace inexorably, one turns into an explosive race to save a fellow officer’s life and the other contains one of the clever twists that prove that even with over 30 books to his name, Connelly is still at the top of his game.